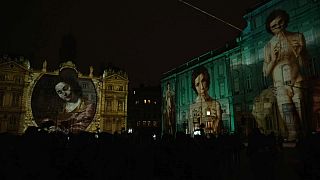 Every year, Lyon hosts the extravagant Fête des Lumières, or the Festival of Lights.

Thursday marks the start of the four-day spectacle, where flowy projections and vibrant installations are dotted all around the French town. Its historic Roman and medieval buildings will again come to life with vibrant, futuristic and luminous spectacles.

Speaking to Euronews Culture, Lyon's mayor Grégory Doucet said that they "wanted, as we did last year, to make the festival as open and accessible as possible for families and children. It is also an inclusive festival since four works were locally made and we also wanted to emphasise and encourage eco-responsibility."

Many of the works are using LED lights and technology, meaning electricity consumption is rigidly reduced.

One of the installations is the Unicode 3D, made by artist Fred Sapey-Triomphe, at Place Louis Pradel in central Lyon. Large panels have been arranged in parallel and illuminate playful objects and messages.

"Indeed it started from something playful, a child's game almost, the ping-pong ball, a common game, banal and which is transformed by the magic of an electronic assembly into a 'pixelated screen' in a surprising way," says Sapey-Triomphe.

"It starts a little bit from the concept of the Tower of Babel where there are an infinite set of languages and it is unified as you say with the Unicode computer system that now allows on a smartphone, or on a computer, to write all the languages of the world including classical Egyptian, ancient Persian, even emojis and then there are empty boxes for the languages of the future," said Sapey-Triomphe.

The popular four-day is renowned for its ability to wow and inspire.

It can have a poetic effect on spectators, reminding us that all facades can be rebuilt if we remove the darkness and turn on our own light.