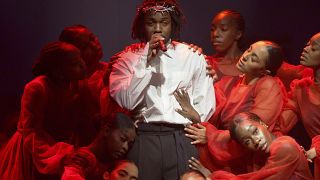 Day 5 of our Cultural Advent Calendar, in which we’re counting down our highlights of 2022 day-by-day all the way to Christmas and beyond. The first seven days are our musical favourites of the year… Today: Kendrick Lamar.

On Saturday night at Glastonbury Festival this year, a legend came onto the stage.

He proceeded to play a bloated and overall disappointing set with genuine hits spread thinly across lesser appreciated songs from an ultimately patchy back catalogue.

But enough about Paul McCartney.

Because the next night, closing out the UK’s biggest music festival, another star cemented his status as one of the most urgent and powerful presences in the industry.

Kendrick Lamar’s Glastonbury headline set was one of the first times audiences anywhere had seen him play songs from his fifth album, 'Mr Morale. & & The Big Steppers'.

With a diamond encrusted crown of thorns, Lamar gave one of the most explosive sets in the festival’s history. Progressing through hits from every era of his career, Lamar dotted the chronological set with songs from his most recent offering.

The diamond-studded crown of thorns poured blood as he sang the song’s refrain, an observation on the veneer of positivity of those surrounding his success.

With his dance troupe assembled around Lamar, the song ended with him making one final appeal. Roe v Wade had just been overturned that week and Lamar shouted, “They judge you, they judge Christ / Godspeed for women’s rights,” over and over before a sudden cut.

It’s a great summation of who Lamar has become and what his latest album represents.

Lamar is the biggest rapper today, but with scale he hasn’t sacrificed his politically astute venom one iota.

I watched the Glastonbury set from my couch, but I caught Lamar in person at the opening gig of his European tour at Amsterdam’s Ziggo Dome this October.

Whereas Glastonbury had five songs from 'Mr. Morale', this set brought 13 songs from the new album to the stage. With flourishes of old classics, Lamar gave a fully fledged rendition of his new album’s narrative.

It’s been a while since 2017’s 'Damn', the last full album from Lamar. The opening track of this year's album 'United in Grief' recognises that fact to the day: “I've been goin' through somethin' / One thousand, eight hundred and 55 days.”

In Amsterdam, his set is once again choreographed to the hilt. For the album and set opener, Lamar appears holding a ventriloquist dummy. The double-time rap bars of the track are performed by the dummy.

After Lamar’s state-of-America ego analysis of 'To Pimp a Butterfly' and the spiritual anxiety of 'Damn', the new album eschews typical hits and manages to plunge even more personal depths.

Nothing is out of his purview, from his relationships with his mother and father, addiction, sexuality, fame, truth and the pandemic. In just over an hour 'Mr. Morale' proves once again that few people are more astute commentators for the era than Lamar.

Some of the most astounding moments come in the second half of the album where Lamar deals with sexual violence, racism and trauma in the stripped-back 'Mother I Sober' and then his acceptance of his trans uncle and cousin in the euphoric 'Auntie Diaries'.

It’s only what’s expected really from the rapper whose last album was the first non-classical and non-jazz work to win the Pulitzer Prize for Music.

If you were worried that the lack of hits would bog down an album by removing its immediacy, the moment Lamar shifts into the second song of his set 'N95' and the bass drops, there is no doubt that he knows how to keep audiences in the palm of his hands.

Lamar performs the tightly wound set identically every night of his world tour. It’s a fitting metaphor for the ways he has both found new depths of the real human in 'Mr. Morale' while still creating distance from us mere mortals to the icon that has become Kendrick Lamar.