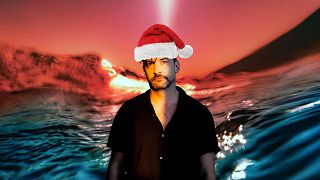 Day 7 of our Cultural Advent Calendar, in which we’re counting down our highlights of 2022 day-by-day all the way to Christmas and beyond. It's the last day of our musical favourites of the year… Today: Bonobo.

I’ll admit despite being an avid listener of all things electronica, trip hop and downtempo (with some of my personal favourites being Flume, Disclosure, Massive Attack and Fred again…), the music of British musician /  producer Simon Green, better known by his stage name Bonobo, had never really caught my full attention.

But 2022 changed that, with the release of his most recent and seventh studio album 'Fragments'.

The 12 song record, which dropped at the start of the year, is a deeply emotional, cathartic and sprawling work, which ranges from wistful and meditative soundscapes to hard-hitting tracks, purpose built for the dance floor.

Green has said the bulk of the album was written and produced during the COVID-19 pandemic, when everyone was forced to self-isolate. It was during this time that the 46-year-old producer found inspiration in the solo hikes and camping trips he took in the Californian wilderness.

It's clear that this connection with nature mixed with a longing for a time post-COVID has shaped the core feeling and atmosphere of the entire album.

The warm, organic and beautifully textured rhythms and orchestral arrangements in this project sound absolutely gorgeous from start to finish and demand to played on good quality headphones or loud speakers.

Bonobo's masterfully produced instrumentals are complimented with a number of wonderful collaborations, including the smooth and soulful vocals of New Zealand-Australian musician and singer, Jordan Rakei on 'Shadows', and the surprisingly unexpected appearance of Glimpse of Us singer Joji, on the track 'From You'.

A standout feature on the album is Chicago-based singer-songwriter and poet Jamila Woods, whose sublime vocals work so well on 'Tides'.

"We wont be dry soon, here comes the tides", sings Woods, encapsulating the flow and album artwork of 'Fragments'.

It’s an incredibly moving track (probably my favourite on the entire album) and seems to get better and better with each listen.

Equally as brilliant as 'Tides' is 'Otomo', which was produced with a helping hand from breakthrough UK dance music producer O’Flynn.

It's one of the most hard-hitting tracks on the whole album. It begins with an intricate and skippy drum break followed by the introduction of an awe-inspiring Bulgarian choral sample. This instrumentation gradually builds and builds until it finally drops.

And let me tell you... this thing DROPS.

I was unable to experience Bonobo perform live this year, but I can only imagine the impact this song would have had on festival crowds.

While 'Fragments' could be considered by some as being overly pleasant, safe and lacking in experimental imagination, I think it's an incredibly slick and moving body of work, from a producer that I can't wait to hear more from.