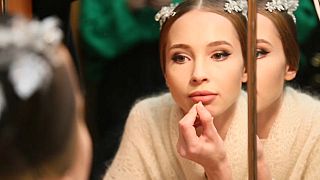 At Odesa's National Academic Theatre of Opera and Ballet, the sound of applause fills the air in the auditorium as the curtain rises on the stage.

In the audience sit dozens of Ukrainian theatre lovers. They have been battling electricity and water shortages in the maritime capital for several days, following a barrage of Russian missile strikes.

Officials estimate that approximately 50% of Ukraine's energy facilities have been damaged in recent strikes. However regional and national authorities have been working around the clock to restore critical civilian infrastructure as fast as possible.

Despite the low temperatures, residents in Odesa have not been leaving in their droves. Instead, they have been trying to rebuild their lives, and go about their days as normally as possible with the help of portable generators.

Odesa's opera and ballet theatre reopened in June. The opera house has had to deal with several skirmishes and just half the staff are now working. However, the performers are still determined to put on a good show.

“On stage, I only think about how I am dancing, about the character… war thoughts don’t interfere,” said Katerina Bartosh, a principal ballerina.

But war is never too far from the minds of both the performers and the directors.

“Several times during performances, there were air raids and rockets exploded over the roof of the theatre. It was very scary… the artists got worried… but after the end of the air raid the performance continued,” said Harry Sevoyan, the acting artistic director at the theatre.

The dancers, musicians and technicians who stayed behind feel like their passion has become their most powerful weapon.

Art in Ukraine is now a form of resistance

“This is very important. Because look how many people came to see the play. People need to get their minds off things. Especially when some don’t even have electricity at home, no internet, no connection. This theatre is the only link they have with the rest of society," said Natalya Dovgaya who works in stage design.

With three or four performances a week, many of which are regularly sold out, the Odesa Opera house hopes to continue to be a safe haven for those who want to forget the death and destruction that surrounds this place.

Even if just for a little while.

“Yes I was afraid and I am still afraid about what will happen. We hope for a happy ending. We believe in our victory" said Viktoria Solovyeva, the second dancer at Odesa's theatre.

Six new developments to know about Russia's war in Ukraine