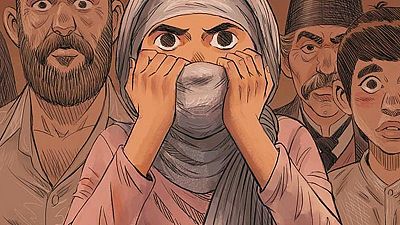 Comics are traditionally associated with fictional stories, but they have in recent decades become a vehicle for non-fiction.

A bracing graphic novel released this year falls into this booming trend, one which explores a horror that cannot be forgotten: the Armenian genocide.

With ‘Une Histoire du Génocide des Arméniens’ (‘A History of the Armenian Genocide’), French comic book writer Jean-Blaise Djian (Djian) and French press editor, film producer and scriptwriter Gorune Aprikian have merged fiction and archival material in a docu-comic. It is an essential artwork that aims for the reader to better understand the complex history of the Armenian genocide and, above all, to keep its memory alive.

By presenting the daily life of an Armenian family shattered by the deportations, this unique comic book addresses one of the greatest tragedies of the 20th century. Through documentary pages, illustrated with archive photographs, it shows how, from 1915 to 1923, the Ottoman Empire massacred and deported at least 1.2 million Armenians in what is now Turkey.

“There was the feeling that this was a topic that had yet to be treated,” Gorune Aprikian tells Euronews Culture.

“It’s important that the denialism regarding the Holocaust and the Armenian genocide is addressed in classrooms, and we felt that there was a need to give pupils, but also teachers and adults, a tool to better understand the issues at stake in this matter.”

Although the political situation in the Ottoman Empire has been tense for many years, the Turkish and Armenian populations live in cordial harmony in Dendil, a small mountain village where the Hagopian family lives. But while the European powers are fighting in the trenches, a general extermination plan of the Armenians is put in place by the Ottoman government.

The father, Arakel, like all Armenians in the village, is falsely mobilized to take part in the war and will be shot by the Ottomans. The remainder of the family is forced to be deported.

The focus shifts to Mikael, the Hagopian’s teenage son, who has to hide for four long years in Dendil to try to escape the deportation and find his family.

“The idea for this book came from Olivier Petit, founder and director of Petit à Petit,” shares Aprikian, who had already worked with Djian - most notably on 'Varto', a graphic novel drawn by Stéphane Torossian and published in 2015, about two children facing the torment of the Armenian genocide.

“This publishing house offers educational comics that mix a fictional comic story with an illustrated documentary. It felt like the right form for this comic book.”

Indeed, the documentary aspect is beautifully drawn by Korean illustrator Kyungeun Park, whose timeless style of illustration complements the dramaturgy, with his precise and rigorous documentation when it comes to getting the most minute details just right. These details are seamlessly merged with the narrative, the two beautifully complementing each other.

“There’s truth in fiction, a truth of the heart that can’t be only transmitted through historical discourse,” says Aprikian.

“Everyone knows what happened, but no one knows exactly what happened. This docu-comic allows the reader to understand that it is a tragedy, and to better grasp it, you need to go back further to tell a story not just about people but about a civilization.”

Aprikian also refers to Nazism, which had taken for model the Armenian genocide, and how Adolf Hitler declared at the conclusion of the Obersalzberg Speech in 1939: “Who, after all, speaks today of the annihilation of the Armenians?”

“At this time, it may have been forgotten, but we’re talking about it now and the fact that the current Turkish government and its negationist stance is still active, and very much part of present-day discussion.”

‘Une Histoire du Génocide des Arméniens’ is also a way of responding to an omission in National curriculum, as the information shared in classrooms can often be somewhat superficial.

“The angle frequently used is talking about the conflict as an ethical one. For me, it’s clearly an ideological conflict. And that’s why I insist in the comic book on the Turkish community and the fact it was not a unanimous position on behalf of all Turks.”

This is seen on the pages through young Mikael’s touching friendship with a Turkish boy, Ali.

“I always think about the Turkish children who are in classrooms and who idolize their nation and culture,” shares Aprikian.

“They arrive in class and they’re told about the Armenian genocide, and they may have the feeling that the finger of guilt is being pointed at their entire culture and identity. That’s false. There were lots of ‘Just Turks’ and a lot of Armenian families were saved by families and neighbours. It’s important to signal that these people existed, that not everyone was pro-genocide.”

Throughout its pages, the authors of the docu-comic take care to put the genocide into context and to pay tribute to all the victims of barbarism. And while it might seem a heavy read, there is always a sense that hope can survive horror.

A hope that continues to resonate today.

“Hopefully, young Turkish children or children of Turkish origin will be reminded that there were Turkish people who helped, who saved, and that this positive image isn’t about denial. You can be proud to be Turkish without being negationist.”

Armenia welcomes Biden's "genocide" recognition, but it's 'not enough'

US recognition of Armenian killings as genocide revives an old debate