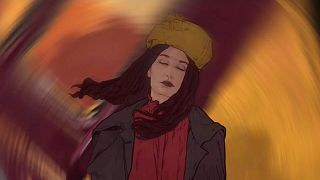 Aurora’s Sunrise is Armenia’s submission for the “Best International Feature Film'' category at the next Academy Awards.

It tells the true and inspiring story of Aurora Mardiganian, an Armenian genocide survivor whose harrowing ordeal became the subject of a film in the 1920s.

It was one of the great successes of the early 1920s in the United States.

This year's film mixes animation and archive documents to tell this personal story which is also the story of a people.

"‘When I became familiar with the story of Aurora Mardiganian and her testimony, I understood it is the unique way to talk about the pain of my nation, but through universal and very personal story of a young girl who survive genocide, but never gave up and never lost her humanity, and at the same time try to help our people," says director Inna Sahakyan to Euronews Culture.

After her escape to New York, her 1918 book was adapted for the screen as, Auction of Souls. She played herself in the film which described the violence she and her family experienced.

‘Despite talking about heavy topics, about genocide, I always try to show the beauty of the land and the connection that my character, and we all Armenians do have with our land, with our memories and our bright part of our past," shares Sahakyan.

"And that's why I think animation and illustrations were the greatest tool to capture that beauty and memories of my main character."

The film is the first animated documentary of its kind to be made in Armenia, with significant participation from European co-producers (Lithuania and Germany).

The film is one of great aesthetic mastery, as well as being an act of remembrance for Armenia.

Click on the video above for clips of Aurora's Sunrise and our interview with director Inna Sahakyan.

French docu-comic keeps the memory of the Armenian genocide alive