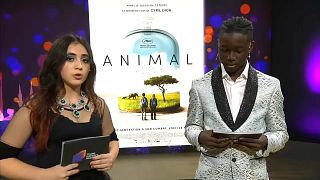 Every year thousands of teenagers from across Europe watch three nominated films and select a winner for the Young Audience Award.

It's an official category of the European Film Awards which will be held in Reykjavik on the 10 December, rewarding the best of European cinema.

The winner this year is "Animal" directed by Cyril Dion, a French writer, director, and environmental activist.

Euronews spoke to Matthijs Wouter Knol, CEO, and Director of the European Film Academy and he explained the process.

"We invite young people between 12 and 14 years old to watch three nominated films, three different films from all over Europe and Cyril Dion's film Animal was one of them. They watched the films, they meet in advance of the day of the Young Audience Award, and then, on one day, a month before the other European Film Awards, the young people of Europe have already voted for their favourite films. And this is the Young Audience Award."

In Animal, Cyril Dion and two teenagers, Bella and Vipulan, meet with scientists and activists from around the world in search of an alternative way of living alongside other species, as cohabitants rather than predators.

The winner was chosen by young juries in 42 European countries watching the films online as well as in over 60 movie theatres.

"For them, it feels more natural to either go to the cinema or still watch the films online."

"It's a project that has grown especially also in the time that screenings were only possible online," said Knol. "It was much easier to reach a lot of young people that couldn't come to the cinema. And actually now, for them, it feels more natural to either go to the cinema or still watch the films online."

Animal and the other two nominated films, Comedy Queen from Sweden and Dreams Are Like Wild Tigers from Germany can be seen on Young Audience Awards website.

The other European Film Awards will be presented in Reykjavik on 10 December.