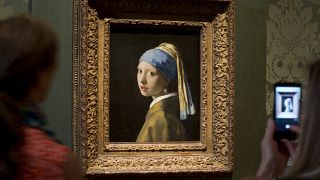 Paintings by van Gogh, Monet, Picasso, Warhol and Vermeer have all been hit by cans of soup as protesters glue themselves to the paintings or surrounding exhibition space.

Most of the protesters have been directly linked to ‘Just Stop Oil’ and have argued that their attention-grabbing protests defacing works of beauty pales in comparison to the destruction of the planet.

Earlier this month, two Belgian protesters were given prison sentences after they poured tomato soup over Johannes Vermeer’s ‘Girl with a Pearl Earring’ in the Netherlands.

Although the actions have brought in worldwide attention to Just Stop Oil and its European cohorts, it has also been a controversial set of protests. Condemnation has come from people shocked at the willingness to deface priceless works of art.

Throughout all these demonstrations, activists have pointed out that only paintings protected by glass have been targeted. The intention has never been to permanently damage the artworks.

Today, a joint statement by the International Community of Museums (ICOM), cosigned by nearly a hundred gallery directors has taken issue with that claim.

“In recent weeks, there have been several attacks on works of art in international museum collections. The activists responsible for them severely underestimate the fragility of these irreplaceable objects, which must be preserved as part of our world cultural heritage,” the statement reads.

“As museum directors are frustrated with the care of these works, we have been deeply shaken by their risky endangerment.”

“Museums are places where people from a wide variety of backgrounds can engage in dialogue and which therefore enable social discourse. In this sense, the core tasks of the museum as an institution - collecting, researching, sharing and preserving - are now more relevant than ever. We will continue to advocate for direct access to our cultural heritage. And we will maintain the museum as a free space for social communication,” the statement concludes.

The ICOM has also published the same statement in French and Spanish.

Signatories of the the letter include the Met and Guggenheim Museums in New York, the Louvre and Musée d'Orsay in Paris, the Prado in Madrid, The National Gallery and British Museum in London, and the Berlinsche Gallery in Berlin.

Although Just Stop Oil has been clear on its intention to not damage the works involved, merely to bring attention to their cause, this is the first time the galleries have spoken out as one against the actions.

So far, no permanent damage has been reported to any of the paintings targeted.

Viola Davis achieves EGOT – What is it and who else holds this title?