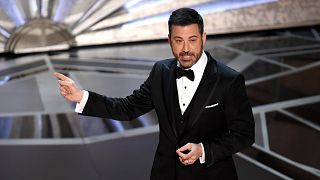 Jimmy Kimmel has been tapped to host the Oscars once more.

The late-night talk show host will preside over the 95th ceremony in March 2023, according to the show’s producers.

“We’re super thrilled to have Jimmy score his hat trick on this global stage,” executive producers and showrunners Glenn Weiss and Ricky Kirshner said in a joint statement. “We know he will be funny and ready for anything!”

The Jimmy Kimmel Live host previously led the 2017 and 2018 telecasts.

The first was the most memorable: the wrong Best Picture winner was called and the chaotic evening saw Moonlight rightfully claim the top prize after it was wrongly given to La La Land.

The moment has been referred to as “envelope-gate” and lives on in infamy as one of the most mind-boggling and embarrassing slip-ups in Oscar history.

The second came just months into the #MeToo reckoning.

“Being invited to host the Oscars for a third time is either a great honour or a trap,” Kimmel said. “Either way, I am grateful to the academy for asking me so quickly after everyone good said no.”

Kimmel joins other three-peaters Jerry Lewis, Steve Martin, Conrad Nagel and David Niven. The returning hosts with the most presenter gigs include Whoopi Goldberg and Jack Lemmon with four, Johnny Carson with five, Billy Crystal with nine and Bob Hope with a whopping 11 times as master of ceremonies.

After the 90th Oscars in 2018, which Kimmel hosted to generally positive reviews, the Academy Awards went without a host until the 94th ceremony earlier this year when Regina Hall, Amy Schumer and Wanda Sykes shared the stage.

“Jimmy is the perfect host to help us recognize the incredible artists and films of our 95th Oscars,” added academy CEO Bill Kramer and academy President Janet Yang. “His love of movies, live TV expertise, and ability to connect with our global audiences will create an unforgettable experience for our millions of viewers worldwide.”

Ratings for the Oscars have declined steadily in recent years despite numerous efforts by the academy to shake up the show’s formula.

The most recent telecast drew 15.36 million viewers, up 58% from the **previous year**’s record-low audience of 10.5 million but still the second lowest viewership in the show’s history.

Kimmel’s previous Oscars, in 2018, averaged 26.5 million viewers, at the time an all-time low.

Many feel like the show needs a complete reinvention, after dwindling numbers and less-than-pulse-racing ceremonies whose only memorable features have been scandals like the aforementioned "envelope-gate" and this year’s Slap Heard Around The World, a pathetic display which saw Will Smith strike presenter Chris Rock on stage.

Smith, who went on to win Best Actor that night for King Richard, was banned from the Oscars for 10 years as a result.

The organization's leadership has said that they'd like to move on from The Slap and focus on a ceremony that celebrates cinema. However, more might be needed in order to rejuvenate the ceremony, as that undignified moment was by far the most memorable part of the evening.

Case and point: Can you remember who won the Oscar this year?

(Answer at the bottom of this article)

So, even if the film industry continues to wrestle with viewership figures and struggles to return to post-pandemic normalcy, there’s hope yet. At least in the eyes of the Academy.

The Academy leadership is reportedly still considering proposals to “invigorate” the live telecast, and ABC executives hope that the excitement around blockbusters like Top Gun: Maverick, as well as the upcoming Black Panther and Avatar sequels will help drive greater interest in the show.

And Kimmel remains a fine choice, especially compared to the underwhelming (and at times cringe-worthy) performances of the Regina Hall, Amy Schumer and Wanda Sykes this year.

“Having Jimmy Kimmel return to host the Oscars is a dream come true. As we see every night on his own show, Jimmy can handle anything with both heart and humor, and we know that he will deliver the laughs and celebratory moments that define the Oscars,” said Craig Erwich, president of ABC Entertainment, Hulu & Disney Branded Television Streaming Originals. “We love being the home of Hollywood’s biggest night and can’t wait to toast the success of this year’s cinema and storytelling.”

The 95th Oscars will be held on Sunday, March 12 at the Dolby Theatre in Los Angeles and will be broadcast live on ABC in more than 200 territories worldwide.

(Oh, and the winner of this year’s Best Picture Oscar was CODA. Had to think about it, didn’t you?)