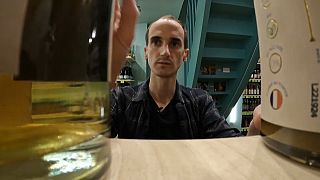 In Normandy, north of France, Valérie de Sutter grows juniper berries, an ingredient commonly used in gin. But this isn't just any gin, it's alcohol-free.

For a country where alcohol, often wine, is an integral part of the culture, the concept is relatively still foreign. But some statistics show French people are drinking less and less of the hard stuff.

"So the market is growing overall by 25 per cent per year," Valérie De Sutter, founder of non-alcoholic drinks brand JPNR.

"Covid helped a lot, perhaps surprisingly, because it is also said that during Covid people consumed much more alcohol. What I saw is that the aperitif returned to the centre of our lives.

"We had a lot of them and some people at home said "well, I'll have one without alcohol". So there, we really saw a trend."

In the capital, attitudes are changing too. In a new cellar in Paris' 19th arrondissement, customers can sample alcohol-free gin and tonics and daiquiris.

"Most of these are brand new products that are one, two or three years old at most," The Drinking Peacock owner Augustin Laborde said.

"So it's a very recent movement. We feel that it is still a niche market. It's very new. But when we really see that we're responding to a demand which wasn't satisfied until now, and above all that the majority of people who come here weren't even aware that all this existed."

In 2017, Santé publique France statistics showed the average alcohol consumption in France had more than halved, dropping from 26 litres in 1960 for those aged 15 or over to 11.7 litres. And some industry experts expect it to be even less now.

This can be largely explained by public health initiatives that encourage people to drink less. But some might need more concerning.

"I haven't yet fully embraced the idea of enjoying a wine or a cocktail without alcohol," customer Marion Quesne said.

"But I think it doesn't take much to enjoy it and to convince your guests as well. I have a daughter, for example, who doesn't drink alcohol and who would really enjoy it."