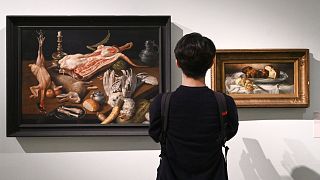 In the aftermath of the Second World War, 61,000 artworks and objects were recovered in Germany by the Allied forces and brought back to France. Many of them had been despoiled from Jewish families.

While more than 45,000 items of property were returned to their owners, approximately 2,200 works (known as MNRs, National Museums Recovery) were placed under the responsibility of the Ministry of Foreign Affairs and entrusted to the custody of national museums.

In Strasbourg, an exhibition is bringing together 27 of these paintings and art objects which were repatriated in 1945, with the hope of returning them to their original owners or their descendants.

"This collection is the most beautiful in France after that of the Louvre", highlights Dominique Jacquot, chief curator of the Museum of Fine Arts in Strasbourg.

Among the works exhibited in Strasbourg, four were owned by Hermann Göring, a powerful figure of the Nazi Party and one of Hitler's most prominent right-hand men.

His stolen collection included the painting "The Betrothed" by Lucas de Leyde, which is presented as the most important work of the exhibition.

Göring was the second largest buyer of works of art under Nazi Germany, behind those in charge of constituting the fund of the gigantic museum that Hitler planned to create in Linz, Austria.

"You should know that there were two privileged recipients in the lootings. First of all, it was due to Hitler's megalomaniac project for a central museum in Linz, very close to his hometown," explains Paul Lang, director of the museums of Strasbourg.

The museum hopes the exhibition will help find the original owners of these works. For example, for descendants it could help revive the memory of a work seen in an old family photo or in the inventory of an estate.

"It's an exhibition that responds to a scientific mission, a legal mission but above all a moral duty," said Lang.

Since 1999, 112 MNR works have been returned to their owners and this was again the case last February in Paris.

But time limits the chances of finding who they belonged to before the war, hence the interest in getting people talking about them.

For Paul Lang, the "ideal objective" of the exhibition would be that at its end, in May, all the MNR works kept in Strasbourg "return to the descendants of their legitimate owners".

"It is not and it will never be too late", insists the director of the museums," said Lang.

It is free to enter the exhibition at the Palais Rohan gallery which runs until 15 May 2023.