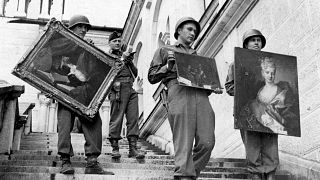 Museums in New York that exhibit artworks stolen or seized by Nazis during the Holocaust are now required by law to let the public know about those dark chapters in their provenance through placards displayed with the stolen objects.

At least 600,000 pieces of artwork were looted from Jewish people in the Second World War, one of the many ways the Nazis tried to eliminate remnants of their culture and identity.

With the last generation of Holocaust survivors fading, the original owners of these pieces of art aren't here to reclaim them.

And for the heirs, those pieces of art might be the only tangible connection to their past.

Signed off in early August, a new law in New York requires museums to put up signage that identifies which pieces were looted by the Nazis from 1933 through 1945.

This law is part of a package of legislation designed to ensure schools and the public continue to be educated about the Holocaust.

The Metropolitan Museum of Art in New York City identified 53 works out of its collection of 1.5 million objects as pieces once stolen, seized, or sold through forced sale during the Nazi era.

The Met is in the process of designing signage to be in compliance with the new state law.

"People should be aware of the terrible cost to people during World War Two as these confiscations took place, and how these peoples' treasures that they loved and had been in their families, had been torn from them at the same time their lives were disrupted," said Andrea Bayer, the deputy director for collections and administration at the Metropolitan Museum of Art in New York.

"We should honor their memory by letting people know that we recognize that these objects have within them this sense of a tragic moment that they have gone through."

Bayer says the pieces on display at The Met, including paintings, manuscripts and sculptures, were returned to their designated owners before being obtained by the museum through donation or sale.