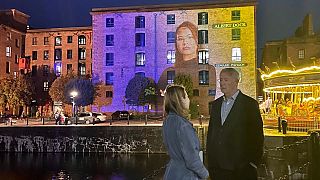 Chris Tarrant is a UK broadcasting star who made his name from hosting the children’s TV show ‘Tiswas’ in the 70s, the game show ‘Who Wants to be a Millionaire?’ from 1998 to 2014 and hosted 4,425 shows across 20 years on Capital Radio.

Tarrant spoke to Euronews Culture about why he took a family of Ukrainian refugees into his home and his part in the unveiling of a new artwork by Ukrainian artist Sergey Piskunov of the refugee Vladyslava Zhmuro.

The iconic site has recently been announced as the hosting venue for the 2023 Eurovision Song Contest, on behalf of the 2021 champions, Ukraine.

Vladyslava, a caseworker for the Welsh Refugee Council, has assisted Ukrainian refugees to find a home following displacement caused by the war. She came to Wales in March 2022 after fleeing Ukraine herself and since then has seen it expand and add a specific Ukraine-focused team.

The Welsh Refugee Council project, which has received more than €1.2 million in funding from The National Lottery, helps refugees find homes and education, supplying English courses and supporting their integration into Welsh society, providing them with protection after escaping danger.

This interview has been edited for length and clarity.

Euronews Culture: Why was it important for you to be part of Sergey Piskunov’s painting launch?

Chris Tarrant: I've got three Ukrainians of my own living in my house. I've got a mum, a daughter and a little baby who I absolutely love. She was seven months old when she came over. They were sleeping on an airport floor in Poland. They left in a panic, they fled. They had no clothes but the ones that were up with one case full of baby clothes. And that was it. When they arrived, they were still quite traumatised. When planes would go over the house, they're worried because they think it's Russian bombs and stuff.

The husband is still there. And he's still fighting in the Donbass, which is pretty scary. It’s quite difficult, because they're always worried if they don't hear from him. But he's in a war zone. And he can't just get to the phones. So it's been quite a fraught situation. They're just the nicest people. They're just so sweet. I love these people. We've now moved them to a big flat in the middle of town, which I'm paying for but happy to do it. It’s because where I live, it’s a big old house, but it's quite remote. So now they can just walk to the shops and restaurants and bars and take the baby to baby club and stuff.

But because of the family, the National Lottery got a hold of me. I'll be honest, I didn't know much about the National Lottery. They spend £30 million a week on deserving causes in the UK. And one of the things they're doing at the moment, they're sending funds to people who they think do extraordinary work.

Vladyslava Zhmuro is just this amazing girl. She came over about the same time, just after the invasion, and the first first week of the war. She settled in Wales. I know how difficult it is to get three people into this country. In the time she's been here, which is seven or eight months, she's brought in over 300 Ukrainians, and more by the day,

Zhmuro’s done all the stuff with the bureaucracy, which is a big problem with landlords that don't want to take them because they're not sure they can pay the rent. She's an extraordinary woman. So she's come out to Liverpool now. And the artist, Sergey Piskunov, is doing a big projection on this massive wall in Liverpool docks of her. So it's a tribute from the lottery, from me, from everybody to her and the great work that she’s done.

Why has charity been such an important part of your career?

So many people don't have as nice a time as I do, to be honest. I've had such a lucky life. I've had a great life. I've got an army of very healthy kids. And I think you should always try and give something back.

My missus and I were watching the news at the very beginning when they invaded, and we're sitting there shaking our heads going, ‘I can't believe this is happening’. And then Jane said to me, ‘We must do something, what can we do?’ So she said, ‘Well, we could take a family’.

They've actually enhanced our lives. All my kids have met them. They love them. The little one we're watching her grow up and she's now toddling around and jabbering away in Ukrainian. The mother speaks no English at all. Except she sometimes goes around going “safe”. “I am safe”, which is lovely.

Do you ever play a round of ‘Who Wants to Be a Millionaire?’ with them?

No, of course not. They all know what I did though. They were showing me some clips of the Ukrainian version which is actually quite fun. What’s interesting with a lot of those foreign versions when you watch them is, I don't speak a single word of Ukrainian, but quite a lot of the punch lines are in English so they say “phone a friend” in Kazakhstan.

In Kazakhstan, do they also do the trick with the cheque where they rip it up dramatically?

Actually, yes. The Japanese show is just extraordinary. I used to do those long pauses, you know? ‘Is this your final answer?’

Now that's quite a long time, isn't it? That's about six seconds. The Japanese host, he does it for about a minute or so.

Unreal. Because when we were selling the show, we said if you want to buy it, you have to take the English version, the “Tarrant version” .

So in America and India and wherever you have to take the basic game. The Japanese wanted, you know, snakes going down their pants and electrodes attached to their testicles. And they can't do that. So all they can do is terrify the contestants by doing these long pauses. It's quite weird.

When did you realise you were an iconic part of British pop culture?

For me, you are at least.

Well, I think you want to question your own culture.

What’s the key to being an engaging presenter?

I nearly didn't do Who Wants to be a Millionaire?. When I did the pilot, I thought this is good. I remember saying to David Briggs, my mate and producer, I said, ‘I think this might run for a couple of years’. 15 years later, I'm still there in the same chair.

What makes you so likeable?

I don't know. I actually don't know. I've never really analysed it. I've just had a good run. I mean, I've never found it. I did a book this year called “It's Not a Proper Job”. And that's actually what I think, it's not a proper job.

Terry Wogan, bless his memory, once said to me, ‘I've never done a day's work since I left the bank in Dublin’. And I kind of know what he meant. It's not hard. I'm sorry to tell you this. What we’re doing is not very difficult.

Meeting and chatting with people is one of my favourite things about it.

I've met so many of my heroes doing this. Bill Clinton, Elton John, Paul McCartney and David Bowie.

When I was doing Tiswas, I remember one morning I was rolling about in custard with Sheena Easton, Chrissie Hynde and Annie Lennox, and I'm thinking, ‘I'm being paid for this job’.

Did you get nervous with anyone in particular?

I was a bit nervous meeting Bowie, actually, because I've met McCartney quite a few times over the years. I sort of knew Paul, and he's very easy to get on with.

But Bowie to me was like a god. He was kind of a weird human. I expected this army of PR people around him and all that he just came in on his own. And he was lovely.

Who were you the most starstruck?

The worst interview I ever did was with Agnetha from Abba. The most beautiful woman I've ever seen in my life.

I just went in and I sort of dribbled, She must have just thought, ‘Who is this? Who is this man? What is wrong with him? I'm not sure I even asked a question.

'I had to run from my country': Distraught Ukrainians arrive in Poland