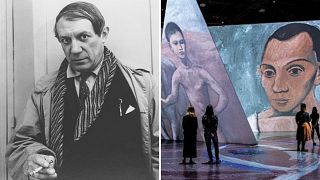 In recent years the art world has seen a huge rise in the number of "immersive exhibitions" popping up around Europe - bringing to life the work of some of the world's most celebrated artists in large spaces with huge light installations.

We've seen this with the likes of Van Gogh, Tim Burton, Michelangelo and Leonardo Da Vinci.

And it doesn’t seem like that trend is going away anytime soon, as Madrid has unveiled a new show dedicated to the prolific and revolutionary Spanish artist Pablo Picasso.

The exhibition titled Imagine Picasso is being hosted at the IFEMA MADRID and it's the largest immersive exhibition ever carried out in Spain, and the first dedicated to Picasso.

More than 200 of Picasso's most famous paintings, including Guernica and Les Demoiselles d'Avignon, are being projected on the walls, the floor and some gigantic polyhedral structures inspired by the origami pieces that Picasso made for his children.

This artistic experience was created by Annabelle Mauger, pioneer of immersive art, and Rudy Ricciotti, winner of the Grand Prix National d’architecture, and was inspired by Picasso's tender gaze on childhood.

The projections are accompanied by music from some of Picasso’s greatest contemporary composers, including Debussy, Satie and Ravel, as well as traditional French children’s songs.

Aside from admiring the stunning painting projections, visitors can learn about the different periods and themes of Picasso, such his early work, the Blue Period, the Rose Period, the African Period, Cubism, Neoclassicism, Surrealism, as well as his later work.

Mauger has described Imagine Picasso as “the impossible exhibition”, since the use of digital technology makes it possible to bring together in the same space, albeit virtually, works found in different museums around the world.

The South African artist bringing down barriers with creativity