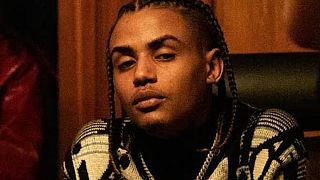 French rapper Luv Resval has died at the age of 24, his family announced over the weekend.

He fell victim to a fatal “asthma attack, a condition he suffered from since birth,” according to his family in a press release published on social media after his death on Friday 21, October.

Luv Resval was born in Guinea but spent his childhood in Essonne, south of Paris.

The artist became popular on YouTube for his freestyles, before establishing himself as one of the rising names on the French rap scene, specifically with his 2017 breakout mixtape '¥ung Life' and his collaborative mixtape with Alkapote, 'Mariah', in 2018.

It was in 2021, when he unveiled his album 'Étoile noire', that he was crowned with a gold record, the first of his career.

His songs ‘Grünt #45’, ‘Xan’, ‘Tatooine’ and ‘Cette Fille’ are some of the artists most popular tracks. His 2021 song ‘Tout s’en va’ has been watched more than three million times on YouTube.

The rapper was known for posting social media videos whilst appearing to partake in drug use, leading many to speculate that the cause of his death could be drug related.

In recent weeks, he announced the upcoming release of his second album ‘Mustafar’ - which is expected to be released posthumously - as well as his headlining gig at the Festival des Nouvelles Voix last Saturday.