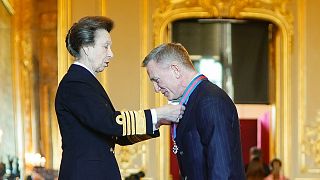 Actor Daniel Craig has been made a Companion of the Order of St Michael and St George, the same and rare honour held by Ian Fleming's famous fictional secret agent James Bond.

The honour was bestowed by the Princess Royal at Windsor Castle yesterday (Tuesday 18 October). Princess Anne, wearing naval uniform, put the order on its ribbon around his neck during an investiture ceremony, celebrating Craig’s outstanding contribution to film and theatre.

"We've been expecting you", the royal family's official Twitter account captioned its photograph, quoting a line famously used by a Bond villain.

The 54-year-old has starred in the last five Bond films, first appearing as 007 in Casino Royale in 2006 and ending his run with No Time To Die in 2021. Around the same time as the movie release, Craig was named an honorary officer of the United Kingdom's Royal Navy. With that appointment, Craig also followed in the footsteps of Bond, who is a Royal Navy commander in the series.

Also receiving honours were film director, producer and screenwriter Paul Greengrass (The Bourne Supremacy, The Bourne Ultimatum, Captain Phillips); street dancer and TV personality Ashley Banjo for services to dance; six-time triathlon world champion Jonny Brownlee; and Dame Emily Lawson, who is recognised for services to the NHS, particularly during the COVID-19 pandemic, after she headed the vaccine rollout scheme in the UK.