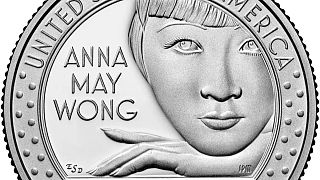 Actress Anna May Wong is set to become the first Asian American to be featured on US currency.

The US Mint will begin shipping more than 300 million coins featuring actress on 24 October, with Ventris Gibson, the director of the US Mint, describing Wong as “a courageous advocate who championed for increased representation and more multi-dimensional roles for Asian American actors".

"This quarter is designed to reflect the breadth and depth of accomplishments by Anna May Wong, who overcame challenges and obstacles she faced during her lifetime," said Gibson.

The coin sees the actress resting her head on her hand with flapper-era bangs while framed by dots, which represent marquee lights.

"Many prominent actors from the 1920s and 1930s saw their name framed by lightbulbs on movie theater marquees, so I thought it made sense to feature Anna May Wong in this way," said Emily Damstra, who designed the coin for the United States Mint.

"Along with the hard work, determination, and skill Anna May Wong brought to the profession of acting, I think it was her face and expressive gestures that really captivated movie audiences, so I included these elements next to her name."

Who was Anna May Wong?

Dubbed Hollywood's first Asian American movie star, Wong was a film and television trailblazer, as well as a champion for greater representation of Asian Americans on screen.

She was born in Los Angeles in 1905 to Chinese immigrants. Her birth name was Wong Liu Tsong, but she later adopted the stage name Anna May Wong.

She was cast in her first role as an extra in the film The Red Lantern (1919) and continued to take on smaller parts until her first leading role in The Toll of the Sea in 1922, one of the first movies made in Technicolor.

After facing widespread and entrenched discrimination in Hollywood, at a time when "yellowface" (white people wearing makeup and clothes to take on Asian roles) was commonplace and anti-miscegenation laws were in effect, Wong traveled to Europe and worked in English, German and French films.

She starred in the operetta Tschun Tschi in fluent German, and her first stage performance in the UK was in the play A Circle of Chalk, in which she appeared alongside a young Laurence Olivier in 1929.

She told the Los Angeles Times in an interview that she was tired of the roles she had to play in Hollywood.

"Why is it that the screen Chinese is nearly always the villain of the piece, and so cruel a villain - murderous, treacherous, a snake in the grass?" she told the newspaper. "We are not like that."

Her career spanned motion pictures, television, and theater. She appeared in more than 60 movies, with some of her most celebrated film titles including 1931’s American pre-Code crime mystery film Daughter of the Dragon, 1932’s Shanghai Express, in which she starred as Hui Fei alongside Marlene Dietrich, and 1937’s Daughter of Shanghai.

Wong also holds the distinction of being the first Asian American lead actor in a US television show for her role in The Gallery of Madame Liu-Tsong (1951).

Wong died in 1961 at the age of 56, from a heart attack, one year after she was awarded a star on the Hollywood Walk of Fame.

When Lucy Liu became the second Asian American to receive a star in 2019, she thanked the late actress for helping pave the way.

Wong will reportedly be portrayed by Li Jun Li in Damien Chazelle’s upcoming period drama Babylon, and a biopic of the actor's life, which will see her portrayed by Crazy Rich Asians and Eternals star Gemma Chan, is currently in production.

The coin is part of the American Women Quarters Program, an effort to feature notable and trailblazing women on American quarters. The four-year initiative began this year and features five women each year until 2025.

The American Women Quarters feature contributions from a variety of fields, including suffrage, civil rights, abolition, humanities, science, and the arts. The women honored are from ethnically, racially, and geographically diverse backgrounds.

Wong is the fifth and final woman to be individually featured on the coin this year, after writer and social activist Maya Angelou; physicist and first American woman in Space Dr. Sally Ride; Wilma Mankiller, first woman elected principal chief of the Cherokee Nation; and Nina Otero-Warren, a leader in New Mexico’s suffrage movement and the first woman superintendent of Santa Fe public schools.

Bessie Coleman, the first African American and first Native American woman pilot, Native Hawaiian hula teacher Edith Kanaka'ole and Mexican-American journalist and suffragist Jovita Idar have all been named as part of the selection for 2023.