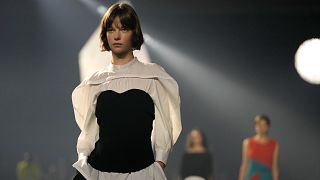 Emerging Japanese designers are striving to emulate the global success of trailblazers like Kenzo Takada.

After the death of fashion greats like Issey Miyake and Hanae Mori earlier this year, there's a line of new Japanese designers eager and ready to step into their shoes.

One of these is Takuya Morikawa, founder of TAAKK. Morikawa spent eight years at Miyake's studio, where he worked on the famous Pleats Please line.

"Issey Miyake, Kenzo, Kawakubo and others ... I think they have greatly changed the way Japanese designers are viewed. They created the foundation, so to a certain extent, it’s easier for us to do our jobs", says Morikawa.

Kenzo became hugely influential by pursuing his passion in Paris. And the French capital remains a goal for emerging talent like Morikawa, whose streetwear-inspired tailoring made its Paris Fashion Week debut two years ago.

Taking the industry in a new direction

Some designers feel that the vast range of styles available makes it harder to grab global attention.

One student acknowledged the debt Japanese fashion owes to designers like Kenzo and Miyake but says now there is a real opportunity to take the industry in a new direction.

"They brought a great deal of Japanese and Eastern values [to the West], and I’m worried what they built might be destroyed due to their passing," said Natalia Sato, a student at Tokyo's Bunka Fashion College.

But at the same time, this is a turning point. It’s a chance for me and other young fashion students to think about how we can create new values", Sato said.

For the time being, it is back to basics for these budding designers of the future.