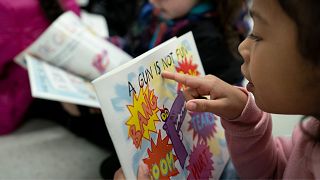 Demand for children's picture books explaining traumatic events such as school shootings has grown dramatically, according to publishers in the United States.

According to NPD BookScan, sales of books for young readers that deal with violence, grief and emotions have increased across the Atlantic for nine consecutive years.

In fact, nearly six million copies of children's trauma-related books were sold in 2021 - more than double the amount in 2012.

Experts say books can be a great way to help kids process their feelings, develop understanding of a particular situation and offer encouragement and hope.

"I think it could be very effective," says Aryeh Sova, a child psychologist.

Sova works with children who attended a parade in suburban Highland Park, Illinois, where seven adults died and many others, including children, were injured in a mass shooting on 4 July 2022.

"I think it could be a great way to help kids become more of a partner in the therapy, because a lot of these books involve activities that they could participate in," Sova said.

A coping strategy for child trauma

Kindra Neely, a school shooting survivor, wrote a graphic novel titled 'Numb to This' detailing her experience during a mass shooting when she was 19.

"So the combination of comics with the pictures and the prose I think is a very unique opportunity to help all readers, especially younger readers, to connect, express those emotions, or just be able to identify with emotions with other people that are going through similar things," Neely says.

Books can also be used in schools to educate children on serious issues in the world.

Ian Ellis James, a seven-time Emmy Award winning writer for his work on "Sesame Street", works with children on gun violence prevention in schools in and around New York City.

"If I could just use a puppet, if I can write some books, if I can use some songs and then go out and start with a five year old, six year old... I think I can change behavior, so that's the strategy," says the writer.

James is encouraged by the fact that schools and parents are embracing his approach of using picture books and puppets to educate children on the dangers of guns.

"If I could get you on board to not have a gun, to not pull a gun on your friend or neighbour and realise that this gun is not a good thing, if I can turn you around, we got something," he says. "We got a little strategy here."