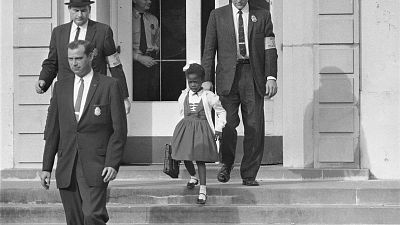 Ruby Bridges, a legendary figure of the US civil rights movement has published a new children’s book.

For those unfamiliar with Ruby Bridges name, she shot to fame aged six with one of the most significant first-days-of-school in history.

Who is Ruby Bridges?

In 1954, just three months before her birth, the US Supreme Court unanimously decided that separate schools for black and white children were unconstitutional.

It took until 1960 before Judge J. Skelly Wright ordered schools in New Orleans, Louisiana to desegregate their schools.

Just in time for Ruby Bridges to start elementary school.

Bridges had previously attended a segregated kindergarten in 1959. Even though the schools were officially ordered to desegregate, they still set up a prohibitive test to try to reduce black attendance.

Three of the children went to McDonogh No. 19 school. Two others decided to stay at their black old school, leaving Bridges to attend her school William Frantz Elementary School as the only black pupil.

At just six years old, Bridges was famously escorted by four federal marshals to her first day of school.

Bridges spent her first day at school in the principal’s office with her mother as all the white children didn’t attend in a boycott led by the parents.

On the second day of term, the boycott was broken when white parent Lloyd Anderson Foreman walked his five-year-old daughter Pam into the school. The only white teacher who agreed to teach Bridges was Barbara Henry.

Bridges recalls the impact Henry made on her life.

“That shaped me into a person that is not prejudiced at all. And I feel like that little girl is still inside of me, and that it's my calling to make sure kids understand that you can't look at someone and judge them," Bridges said.

A life story in a picture book

Now, Bridges has turned her experience into a children’s picture book.

‘I am Ruby Bridges’ features illustrations by Nikkolas Smith. The book comes with a glossary that explains terms like ‘Supreme Court’ and ‘law’ for children.

“It’s a true reflection of what happened through my own eyes,” Bridges said.

The book is designed to explain differing opportunities and the ability for children to make a difference to her youngest audience yet.

“I've been very, very fortunate because of the way I tell my story that my babies come in all shapes and colors, and my books are bestsellers, and maybe banned in schools,” she said. “But I think parents really want to get past our racial differences. They're going to seek out those books.”

Still a resident of New Orleans, Bridges has published four other books including 2020’s ‘This is Your Time’, aimed at older children.

The new book’s theme plays off the author’s name: “Ruby” is a precious stone, and “Bridges” are meant to bring people together. Told with a touch of humor from the vantage point of a first-grader, the book captures the wonder of Bridges’ experience — rather than just the scariness of that raucous first day at the school.