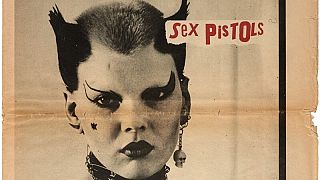 It’s anarchy in the UK.

Well, at Sotheby’s at least.

The auction house is getting its punk on this month with Sex Pistols art going under the hammer.

Whether it’s posters, collages, hand-printed handbills for gigs or manuscript lyrics, the rise of Britain’s most notorious band and UK punk’s foremost agents of chaos is being celebrated with the Stolper-Wilson collection going on sale.

The bevy of counterculture collectables was assembled in the 1990s by contemporary art dealer Paul Stolper and former senior curator of Modern British Art at Tate Andrew Wilson.

This last item is of particular resonance considering the song’s seemingly unending reverberation through music history and the history of the UK. Indeed, the legacy of the Sex Pistols and the Queen have always been intertwined, even in death.

Originally titled ‘No Future’, the anti-authoritarian anthem expressed the anger young people felt toward the establishment, a cry of outrage aimed at a sacrosanct image. It was deemed incredibly offensive at the time, as it equated the Queen with a "fascist regime." It was released during Queen Elizabeth II's Silver Jubilee, on 27 May 1977, and was regarded by many as an assault on the monarchy.

Sex Pistols lead singer John Lydon, aka Johnny Rotten, had the song on his mind long before he brought it to the band or even committed it to paper. He explained in an interview with Daniel Rachel ('The Art of Noise: Conversations with Great Songwriters'): "'God Save the Queen' was running around in my mind for months, long before joining the Sex Pistols; the idea of being angry, of the indifference of the Queen to the population and the aloofness and indifference to us as people. I had to work on building sites to get the money to go to college because I wanted to further my education and yet I was taxed to fuck. Why am I paying for that silly cow who couldn't give a shit about me? Along come the Pistols and just one morning over baked beans I wrote it down in one go on Mum and Dad's kitchen table."

"You don't write 'God Save the Queen' because you hate the English race,” added Rotten. “You write a song like that because you love them, and you're fed up with them being mistreated."

Major retailers refused to sell the record and the BBC banned the song’s transmission.

That didn’t stop it from outselling the number 1 song at the time, Rod Stewart's ‘I Don't Want To Talk About It’ and reaching No. 1 in the NME charts in the week of the celebrations. Controversially, it stayed at number 2 on the official UK Singles Chart as used by the BBC. This led to accusations by some that the charts had been "fixed" to prevent the song from reaching the top spot. It was only in 2001 that the BBC stated that the song “reached number one in the UK.”

On the actual day of the Jubilee, 7 June 1977, the Sex Pistols famously got on a riverboat called Elizabeth, sailed up the Thames, and played ‘God Save the Queen’ outside the Houses of Parliament. The gig was cut short by the London police.

Their celebrated debut album 'Never Mind the Bollocks, Here's the Sex Pistols', which featured the song, was later released on 28 October 1977.

And now, after having re-released ‘God Save The Queen’ for the Platinum Jubilee earlier this year, and only several weeks after the death of Queen Elizabeth II, the auction reminds us that a band dared to speak up about their resentment towards British politics, the monarchy and the sins of The Firm, who the Sex Pistols deemed viewed the population as subservient "morons" ready to be mistreated.

The Sex Pistols: The Stolper-Wilson Collection auction started on 10 October and lasts until 21 October in London.