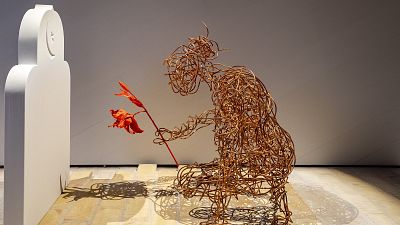 A new Danish museum is telling the story of refugees from the site of a World War II refugee camp.

The museum is called Flugt, which means “flee” or “escape” in Danish.

Situated in Oksbøl, on the western coast of Denmark, the museum is on the site of a refugee camp which took in thousands of Germans escaping from the falling Nazi regime.

As the Second World War came to a close and the Soviet Red Army tore through Germany, around 250,000 Germans fled to Denmark.

About 35,000 of those refugees came to Oksbøl, turning it into Denmark’s fifth biggest city at the time.

Operational between 1945 and 1949, the site had a school, theatre, and workshop, all behind barbed wire.

Now, there is little left of the original site other than two hospital buildings and a cemetery among the dense surrounding forest.

"We want to tell the story, behind the numbers, of the real people," director of the museum Claus Kjeld Jensen explains.

"There is this period of world history that took place right here, where we are. But there is also the situation today," he says.

"We have many more refugees in the world than we had at the end of World War II. So I guess the issue is more relevant than ever," Kjeld Jensen adds.

Refugees across the world

As of 2021, almost 90 million people were either refugees or displaced, according to the UN Refugee Agency (UNHC).

12 million more people have been uprooted by the Russian invasion of Ukraine, reports the UNHC.

"When we started this project, we thought it was a thing of the past for Western Europe," Danish architect Bjarke Ingels said at the opening.

Ingles is a world-renowned architect who designed the museum and recently completed the new Google headquarters in Silicon Valley.

Inside his work, towering wooden frames stretch skyward, creating a large open foyer from which visitors explore the exhibits.

A place conceived as "an oasis or sanctuary that opens to the forest," according to the designer. "That's in a way what I hope the refugees have found here - a sanctuary and a glimpse of a better future."

The museum opened on Saturday June 25 to a cost of €16 million. The opening was inaugurated by Denmark's Queen Margrethe II and German Vice-Chancellor Robert Habeck.

"No one would have thought that it would be so sadly topical to talk about refugees and exile," the 82-year-old monarch said.

The museum opens at a time when Denmark is criticised by the EU for its tough asylum and anti-migration policies.

In recent years, governments of both the right and the left have pursued one of the strictest migration policies in Europe.

In 2019, the Danish prime minister declared that Denmark wanted ‘zero asylum seekers’ and Denmark was the first country in the EU to begin revoking residency permits for Syrian refugees, after deeming that the situation in the country allowed them to return home.

Danish migration policies "are very politically oriented and we hope, of course, that there will be a way to change that," said UNHCR representative Henrik Nordentoft.