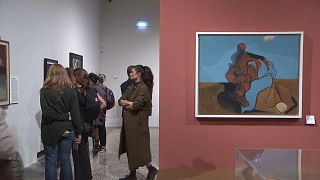 Paintings, sculptures, drawings, collages, jewels and illustrated books by the late artist can be admired at the Palazzo Reale in Milan until February 2023   -   Copyright  EBU
By Euronews  •  Updated: 07/10/2022

Curators Jurgen Pech and Martina Mazzotta spent several years locating and compiling over four hundred examples of Ernst's work, highlighting his fresh and novel approach to painting in the twentieth century, as well as his fascination with the unconscious mind.

This collection, spanning seven decades, includes dozens of paintings, drawings, and scenes from illustrated books as well as collages.

Contributions were made from the Civic Gallery of Modern and Contemporary Art in Turin, the Peggy Guggenheim Collection in Venice, the Tate Gallery in London and the Center Pompidou in Paris.

Born in 1891 in Brühl, Germany, Max Ernst began his studies in philosophy at the University of Bonn in 1909 but quickly turned his attention to art and quit the university.

His first exhibition took place in Paris in 1921 at the Au Sans-Pareil gallery as he turned his attention to surrealism.

As a founding member of the movement, he worked alongside Spain's Salvador Dalí and Luis Buñuel for the film The Golden Age in 1930.

As a naturalised French and US citizen, Ernst was a painter, sculptor, poet and art theorist in his lifetime and dedicated seven decades of his life to his art before his death in 1976.

“The choices (we made) are in the four themed halls: Eros and Metamorphoses, cryptographies, the four elements, nature and vision. And in order to show these important themes for Max Ernst, we’ve chosen specific works," says curator Jurgen Pech. "Obviously, he has been creative for 70 years and we could only display 400 works while his complete production was roughly 7,000.”

Despite having had no formal training as an artist, Ernst's colourful works challenge visitors to explore the symbolism behind surrealism, as well as the balance between one's dreams and rationalised perceptions of human life.

“Max Ernst is a luminous and clear figure, and at the same time an enigma,” says curator Marinta Mazzotta.

The exhibition opened on 4 October and is open to the public until 26 February 2023.

'Objects of Desire': How did Surrealism influence design?