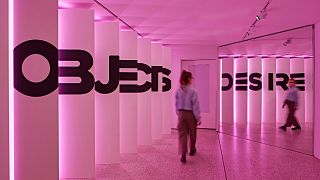 From Salvador Dalí's lip-shaped sofa to the dreamlike video clips of Icelandic artist Björk, Surrealism has influenced design for almost a century.

A new exhibition opening at London's Design Museum is exploring this facette of the artistic movement.

Some of the world's most famous Surrealist paintings and sculptures are on display, such as Dalí's Lobster Telephone (1936) and Man Ray's The Gift (1921).

What to expect from the exhibition?

'Objects of Desire' is split into four sections, focusing on Surrealism’s influence on everyday objects, interior design, fashion and the body and the mind.

The exhibition begins by introducing the origins of Surrealism in the 1920s, and analysing the vital role that design played in its evolution - from decorative arts and furniture to interiors, fashion, photography and film.

"Surrealism began as a literary movement, but quite quickly started to find expression in art, a fascination with making objects which quickly became a design movement as well," explains the curator of the exhibition, Kathryn Johnson.

In this first section, visitors can admire Magritte's painting and sculpture This is a Piece of Cheese (Ceci est un morceau de fromage) (1936 or 1937), Marcel Duchamp's Porte-Bouteilles (1959) sculpture, and Dalí's famous painting, Metamorphosis of Narcissus (1937).

The section on Surrealism and the body examines the movement’s embrace of the human form as a canvas, and explores themes of love, eroticism and sexuality, which played a key role in Surrealism.

Fashion is also major strand of the exhibition.

Artists such as Lee Miller and Man Ray worked as fashion photographers, and some surrealists like Dalí and de Chirico even created covers for fashion magazines such as Vogue - all of which are on display in the show.

Surrealism - more alive than ever?

The exhibition argues that Surrealism, a reaction to the horrors of World War I and the 1918 flu pandemic, has undergone a resurgence in turbulent times.

"It's no accident that these moments coincide with periods of economic and political instability, because Surrealism was founded on a creative embrace of chaos - it accepts uncertainty, the inexplicable, and I think we need it now," says Johnson.

Music videos of songs such as 'Utopia', 'Mutual Core' and 'Hidden Place' - made by Björk between 2001 and 2017 - show the dreamlike relationships between humans, nature and technology.

According to Johnson, even strange images generated by artificial intelligence "can result in different kinds of art."

"Artificial intelligence is modelled on the way that the brain works, and it doesn't surprise us that it can be creative, but it's fascinating to see how that may play out in the future," she adds.

"Today, in the context of dizzying technological change, war and another global pandemic, Surrealism’s spirit feels more alive than ever in contemporary design," Johnson concludes.

'Objects of Desire: Surrealism and Design 1924 -Today' runs from 14 October to 19 February at London's Design Museum.