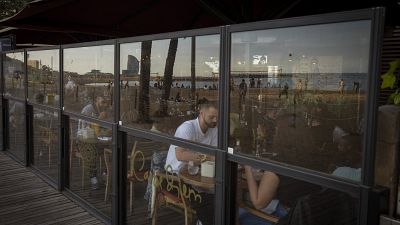 Restaurants play an important role in European culture, but with Europe's rising costs and increasing inflation rates, it's becoming increasingly difficult for people to afford to dine out.

In Spain, the menu del dia -- menu of the day -- has long been a popular option for those wanting to eat out without breaking the bank. Dreamt up during the 1960s to attract tourists, the menu is an important part of Spain's culinary heritage. Experts say its price indicates how the country's economy is performing more generally.

For a starter, main course and dessert or coffee, bread and a drink, the average price is around €13. But with inflation in the country hovering around 10 percent, this once modest dining tradition is under threat as restaurants seek to cut losses.

"We have not changed anything in principle. We are trying to handle our losses but we think we might have to raise the price of the daily menu, because this is already too much of a cost for us", said José Manuel Escamilla, Manager of Café Gijon in Madrid.

"Prices in all areas of life are going up; electricity is skyrocketing, mortgages are skyrocketing, and if it continues like this, it’s going to be very difficult to manage".

The restaurant industry as a whole is feeling the pressure of rising energy and raw material costs -- with many businesses still finding their feet after the COVID-19 crisis.

On Wednesday, the Bank of Spain slashed its GDP growth forecast for next year -- amid high energy prices in Europe and low consumer spending.

"The sector is frankly concerned because at a time when we are returning to normality, it is like a cold shower", said Emilio Gallego, Secretary-General of the Spanish Confederation of Hotel and Catering Businesses.

'Everything is overheating': Why is Turkey's economy in such a mess?