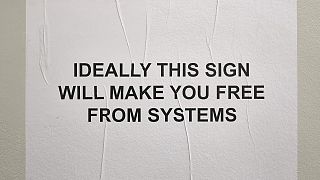 The little bird must be caught,

Or he will escape up high,

And we will miss our chance

To stifle his little cry.

The Greek curator iLiana Fokianaki was struck after stumbling on these words by the Latvian poet and writer Ojārs Vācietis (d.1983).

She felt they were so raw with honesty in their questioning of Soviet dogma, they inspired her to create “The Little Bird Must Be Caught” - the title of this year’s edition of the Survival Kit art festival, one of the largest contemporary art festivals in the Baltics.

Far from riding the wave of resistance that's been sparked across much of the world by Russia's war on Ukraine, the idea of this show was born before Moscow's troops moved in. Perhaps because in Latvia, like many other former Soviet states, many constantly question what role of art has in defending free speech and self-determination.

Fokianaki's show, organised by the Latvian Centre for Contemporary Art, explores freedom of speech and sound, as well as various forms of resistance and Latvian history, in the context of today.

The show, borrowing its very title from The Little Bird Must Be Caught, “looks at the cultural practices that position themselves against various types of authoritarian-isms and repressions,” says the curator. Just as poetry was a source of strength, freedom and, indeed, a mode of survival for Vācietis, so Survival Kit could be described as something of a catalogue of modes of resistance – AI, gaming, music, and even cross-stitch, can be employed in the fight for emancipation.

The power of speech

Some elements of the show are subversive by their very existence. Perhaps chief among these is The Hearing Voices Café, by Spanish artist Dora García.

Initially inspired by independent groups that work to de-stigmatise the experience of hearing voices, it evolved to "to open up to other communities and other resistances, other struggles,” says García. This has variously included women's movements, anti-racist movements, and PTSD support groups.

In the Latvian capital Riga, the project is focusing on support for Ukrainian war refugees, working to build mutual understanding between them and the wider Latvian public.

Whatever the focus, García tells Euronews Culture that the Café carries the spirit of the voice hearers, who were unafraid to break taboos: “The Café is named after them and follows their attitude – resist stigma, resist marginalisation, resist isolation and finger-pointing. Let's create a place of safety, of freedom, and of debate. This is resistance.”

If discussion and debate form the backbone of the Café’s resistance, Moscow born artist Anton Vidokle’s film Gilgamesh: She Who Saw The Deep (a feminist cinematic rendering of The Epic of Gilgamesh) reminds visitors that speech itself can be a dissident act.

The film is primarily in the Kurdish language (Kurmanji), officially banned in public and private life following the 1980 Turkish coup d'état. The power of language, and its prohibition as a tool of repression and control, is underlined by an accompanying timeline detailing the history of banned languages across the world.

Art in the time of war

Survival Kit 13 is being held just off Riga’s Dome Square, where Fokianiaki describes that “key events in the emancipation of the Latvian nation took place: the backdrop for the marches and demonstrations for what became known as the Singing Revolution.”

The context of Russia’s aggression undoubtedly sheds a spotlight on participating artists from nations formerly part of the Soviet Union.

Among these is Ukrainian artist and filmmaker Mykola Ridnyi’s 2017 video work NO! NO! NO!, which follows a group of creatives in Kharkiv as they navigate life on the borders of war.

“I had a feeling that culture has a big potential to grow during the war and form the peaceful future of the city,” Ridnyi tells Euronews Culture, explaining his choice of protagonists. “It was all people from the culture community, although they are very different: a queer activist and poet, a fashion model, a group of street artists, a creator of a computer game.”

These protagonists, whom Ridnyi describes as rather different from the “typical heroes of wartime” all have their own modes of resistance: questioning whether it’s appropriate to hold a fashion show in such a fraught context, or designing games that echo a war reality, for instance.

A perhaps even more unexpected tool of dissidence, Belarusian artist Rufina Bazlova and Moldovan curator Sofia Tocar instrumentalise embroidery in what Tocar calls “a slow way of resistance”. Their ongoing project, Stitchit, uses traditional Belarusian stitching to tell the stories of political prisoners in Belarus – all in red and white, a nod to the red-and-white flags that became hallmarks of the 2020 anti-government protests.

The theme of political repression in Belarus is equally taken up in Marina Naprushkina’s installation, "I want a President". The political artist and advocate of democratisation in Belarus takes the words of Zoe Leonard’s eponymous 1992 poem, and applies them to the mass protests in opposition to the regime of Alexander Lukaschenko.

A poem-emblazoned poster, together with the paintings Naprushkina displays, “refer to the contemporary history of resistance in Belarus but also to the history of discrimination and marginalisation of women,” the artist tells Euronews, with the peaceful protest actions in Belarus largely carried out by women.

With this in mind, Naprushkina pays particular homage to musician and activist Maryia Kalesnikava, who has been imprisoned in Belarus since 2020.

Taking power from the state, handing it to people and the planet

Moving further east, responding to communication blackouts and the fabrication of a false narrative by government sources when the January 2022 demonstrations in Kazakhstan left over 200 dead, Kazakhstani artist and curator Almagul Menlibayeva sought to channel power away from the state and to empower individual voices.

Her project AI Realism employs AI to reconstruct human memory, building powerful images from the words of witnesses. “For me this is an act of resistance in a situation where the technology of control is concentrated in the hands of Power,” says the artist. Although AI Realism addresses violence perpetrated by the state in Kazakhstan, Menlibayeva sees it as “connected with the current political situation and with the war and Russian aggression”, not least because CSTO troops (mostly from Russia) were invited into the country to deal with the unrest.

As the war grinds on, endurance becomes a watchword – both for those on the frontline and those reading the headlines. In her video work This is How We Win Wars, Palanga-born, London-based Indrė Šerpytytė presents a growing collection of videos of soldiers dancing (with recent additions relating to the war in Ukraine).

The dancing, she says, is a survival tool for “the young men who are trying to cope with death, fear and loss”. “In these rare few minutes away from combat we see them releasing their emotions through dance in the most intimate manner. The soldiers fully immerse in the movement and, in that moment, they are free,” the artist explains.

Presenting two installations, Latvian artist Krišs Salmanis encapsulates, on the other hand, the sound of weariness and desperation that can overtake those witnessing the war from a distance. “Wake Me When It’s Over" is an illustration of how I felt when the war crimes in Bucha were discovered,” says Salmanis of his haunting yet somehow calming work, which sees a wave ripple down the length of of a a 4x15m plastic sheet with a sound akin to a slow exhale or “doleful” sigh.

His second work for Survival Kit 13, Strategic Patience, featuring the falling of water drops, speaks to the need to endure in spite of exhaustion: “Both works are about patience. Now that the full-scale war has continued for half a year we may feel a little out of it. But even if we give in, evil will not.”

In a small side room, deep in the heart of the exhibition, visitors will find Kristaps Epners’s captivating video work Maslova, which saw the Latvian artist travel to an Old Believers’ house of prayer in Latvia’s easternmost region, Latgale. “Old Believers have experienced and overcome many different prohibitions and repressions. One of them is the prohibition of practising unison singing of the Znamenny Chant,” Epners tells Euronews Culture.

Here, at the prayer house in Maslova, however, “the strong and kind-hearted voice of Old Believer Varvara Potapovna Dorofeeva can be heard”. As in the Singing Revolution, the symbolic resistance of her singing speaks to the voice as a powerful tool of resistance.