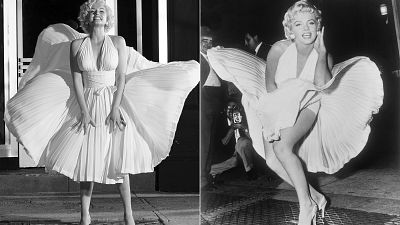 Marilyn Monroe's on-screen costumes are almost as iconic as the Hollywood actress herself.

From the hot pink strapless gown she wore to sing "Diamonds Are a Girl's Best Friend", to the white halter cocktail dress which fought an upward breeze over a subway grate in The Seven Year Itch, Monroe will always be remembered as a fashion icon.

Needless to say _Blonde_costume designer Jennifer Johnson felt an enormous amount of pressure to get the dresses that we all know so well spot on for Netflix's highly-anticipated film, which was released in Europe on 28 September.

The challenge in recreating dresses from the past

The vast majority of the clothing worn by Ana de Armas in Blonde were recreations that Johnson and her team had to painstakingly recreate without the actual garments on hand for reference.

But that didn't stop them from attempting to make the dresses look as close to the real thing as possible.

"We couldn't obviously access the same fabrics, but it was really important to uphold the quality of construction to those original dresses so they didn't feel like a cheap simulation or like a costume," says Johnson, who worked on I, Tonya in 2017.

Johnson revealed that by far the most difficult dress to recreate for the film was Monroe's iconic white dress, worn in The Seven Year Itch, originally conceived by legendary Hollywood costume designer William Travilla.

The pleating proved to be hugely complex - in part because of the lack of places in the United States that specialise in the specific technique used by Travilla.

"We had a lot of failures," Johnson says.

"It was incredible how much fabric it took to create the arc and the drama of that dress when it blows up with the subway grate... I think we went through about 50 yards of fabric because the pleating wasn't right. It looked great, but the molds were not designed correctly for the pleating. There was a lot of research and development and waste going into that."

But Johnson admits that the hard work was all worth it when she saw the memorable moment in the movie.

"It's so beautifully shot by Chayse Irvin, our amazing cinematographer, and Andrew (Dominik, the director) is such a visionary," she shares.

Monroe's style off the big screen was much more subdued and far from the sequins and glitziness of her movie looks.

Johnson and Dominik decided she should have an off-duty uniform of sorts, consisting largely of Capri pants and turtleneck sweaters, some of which were vintage finds from Los Angeles costume houses.

Naturalism was paramount for Johnson, including making sure that the outfits worked for both de Armas's body and a contemporary viewing audience.

However, one thing they didn't replicate were the marbles Monroe famously sewed into her bra. That, Johnson believes, would be distracting to modern eyes.

"The viewer is always aware of her body. And so it was kind of for me like, how do I approach her everyday look? Where she's still sexually vibrant, you know, like very beautiful and confident, but that she's taken seriously as an artist."

Blonde is currently out on Netflix. Read what our resident film critic had to say about the film here.