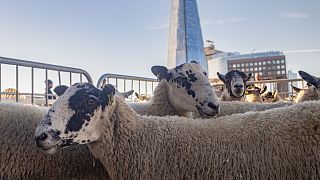 Yes, you did read that right.

On Sunday 25 September, more than 1,000 Freemen (and ladies) of the City of London exercised their ancient right to drive sheep toll-free across London Bridge into the heart of the UK capital.

With the bridge leading into the financial centre of London closed, the sheep were driven back and forth over the river Thames throughout the day, trotting along against the backdrop of some of London's most famous landmarks, such as the Shard and Tower Bridge.

All seemingly unphased by the constant stream of red double-decker buses and traffic tearing past.

Sunday marked the 10th anniversary of the event, though its origins stretch back more than eight hundred years.

Joining in with this year's Sheep Drive was UK celebrity Kate Humble, the Lord Mayor of London Vincent Keaveny, as well as Sheriffs and Liverymen of the City of London, glad in some very colourful robes.

Like most of the UK's traditions, the Sheep Drive dates back a very long time - the 12th century to be precise.

In medieval times, freemen were allowed to take their sheep into the City and sell them at market without having to pay a toll.

The reason why they could drive their sheep across the bridge - then London's only river crossing and trade route - tax-free is not clear.

One theory is that by not paying for the bridge the Freemen could sell their sheep cheaper than everyone else who had to cough up. But that's just a theory.

Freemen themselves were members of trading guilds "freed" from feudal lords. From 1237, these tradesmen brought their right to freedom, effectively gaining special privileges and a license to make money as a trader.

Carrying a sword in public was one of these, alongside a bit of sheep herding.

However, many of these guilds' trading monopolies were abolished by the Victorians in the 19th century, turning them into more ceremonial and charitable organisations.

While freemen were, as the name suggests, primarily men throughout history, the Freedom of the City says they have a "long tradition of admitting women" and represent a "very broad cross-section of the population".

Despite its ancient roots, the City of London is keen to keep its traditions alive.

“The City is obviously a huge financial centre and we have a reputation for being a bit greedy and not being nice people, but actually the City is founded on traditions and there’s an incredibly rich history," Rafe Clutton, master of the Guard of Young Freedom, told the Independent in 2018.

One passer-by was shocked at seeing farmyard animals amid the hustle and bustle of the city.

"It was so surprising to see a bunch of sheep on the bridge," said Jessica Sankey, who accidentally stumbled upon the spectacle while looking for "ice cream".

"At first, I was a little concerned for our sheep friends, so far from a farm and on the concrete, but they looked really well looked after and happy," she added. "All in all, it was really great."

This year's edition of the event was organised by the Worshipful Company of Woolmen for charitable causes, while highlighting the importance of wool as a material.

"Today’s very special 10th anniversary Sheep Drive and Livery Fair is a wonderful opportunity to share the news about the wonders of wool, a unique, natural fibre with potential uses seemingly as wide as the human imagination," says Peter Hullah, Master of the Worshipful Company of Woolmen.

Proceeds from the event went to the Woolmen's Charity and the Lord Mayor's Appeal. It is thought to have raised tens of thousands of pounds.

In the past, UK celebrities such as Barbara Windsor and Alan Titchmarsh (both freemen), have escorted sheep across the historic bridge, helping to raise money and awareness for agricultural issues.

People can apply to join the Freeman of the City by being proposed by two existing members, paying a fee or as a reward for public service.

Something tells us that the Sheep Drive will return next September. Don't miss it.