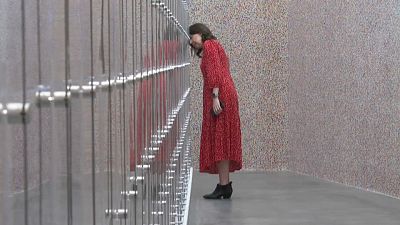 Fans of British artist Damien Hirst will be happy to learn that the 57-year-old is back with his latest exhibition, "The Currency", in south London.

Buyers can choose between a virtual copy or the original painting.

On the back of each piece are handwritten phrases based on lyrics from the artist's favourite songs.

Virtual versions of these pieces are called non-fungible tokens. Each NFT has its own digital certificate and is registered in a blockchain like a crypto-currency.

The works date from 2016 when Hirst created paintings he thought could become a kind of currency.

However, it was two years later when the artist, whose works are among the most expensive on the market for contemporary creators, came up with the idea for the project in its current form.

NFT technology has risen in popularity amongst art collectors.

The people who bought the paintings received the corresponding NFT and had a year, until July 27, to choose whether to keep the NFT or exchange it for the original painting.

More than half (5,149) decided to take the painting while the rest opted to keep the NFTs.

Hirst now plans to burn the 4,851 physical paintings of those who chose NFTs.

Upstairs in the gallery, six fireplaces are ready to burn the original works.

Pay your money, make your choice

"It's an experiment... We're forcing people to make their choice", said Hirst.

Each painting within the collection has been signed by the artist and went on sale last year for 2000 euros a piece, however, demand soared which bumped up the price. One painting even sold for 172,000 euros.

A graduate of Goldsmiths College in London, he is reportedly the richest living artist in the United Kingdom with a fortune estimated at 384 million euros.

Having forged his career out of pushing back the boundaries of art through sculpture, paintings and drawings, Hirst says this project explores when art changes into currency and when currency becomes art.