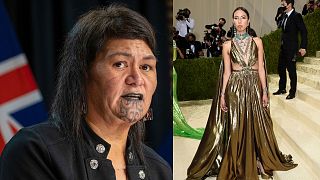 Earlier this year a young woman in Queensland, Australia was turned away from a nightclub.

Moale James had gone out for her partner’s birthday, but when she arrived at her destination, door staff turned her away because of a tattoo placement.

“He looked…at me and said I'm not going to let you in because of your face,” she told a local outlet in June.

"I thought, ok this is the moment. I explained they were cultural and he still said no, because of my face.”

James, who is of Papaun descent, said she had been warned that her traditional facial tattoo - called reva reva - might lead to discrimination, but she was still shocked.

James’s tattoo is part of a movement seeing more and more young indigenous people reclaiming their culture by getting facial tattoos - so what’s the fuss?

After centuries of oppression the practice of facial tattooing is back in vogue from the Arctic to the South Pacific.

TikTok - the platform of choice for social justice-conscious gen Z - is filled with indigenous people from Dakota to Wellington educating users on facial tattoos, in a lesson that proves social media can be a force for good by empowering the marginalised.

“I joined the realm of TikTok just as a consumer and I came across all these creators that wore facial moko,” says Turanga Edmonds, a young Māori who got a facial tattoo - called moko - last year.

“We grow up around stigmas and are told things that aren’t true.

“Our own parents and grandparents have grown up in eras where colonisation really beat down Māori culture and perpetuated untruths about our culture to our own people.”

Edmonds had grown up hearing that facial moko had only been for chiefs, or that it needed to be earned. There is also a stigma in New Zealand due to moko’s connection with gang culture.

On TikTok Edmonds - who is a bassist for metal band Alien Weaponry - found out the truth.

“They were debunking these stigmas and that made a big impression of how I was thinking at the time,” he says.

Why did facial tattoos become taboo?

New Zealand’s Māori population - related culturally to other Polynesian indigenous people - were colonised by Europeans in the 1800s.

Prior to official annexation in 1840, trade between Māori and Europeans resulted in the Musket Wars where intertribal warfare between indigenous people resulted in tens of thousands of deaths.

During this time a grisly trade in shrunken heads of Maori men with facial moko flourished, resulting in a slowing in the take up of the practice.

For good measure the British also began a fairly typical regime of oppression on their colonial subjects, suppressing Māori cultural practices including moko.

The practice did survive through adoption of non-traditional placement of tattoos on arms, on women whose facial placement of moko is more discreet, and in far flung rural settings of the islands the British had seized.

In the latter half of the twentieth century facial moko was revived by Māori gangs who wished to revive their culture. Unfortunately, the criminal element of this association led to even more stigma and the length of the colonial period meant many people weren’t in a position to correct the misinformation surrounding moko.

“Even when you go ‘oh mum what about this or that’ they are then teaching forward those misconceptions,” says Edmonds.

“When everybody believes that stuff no one ends up wearing it.”

Prior to his big break in Alien Weaponry Edmonds was working in a bar in Wellington.

One night a group of young Māori professionals came in, all sporting facial moko. It was a far cry from the gangland stereotypes that had persisted throughout the bassist’s childhood.

“They were ‘professional,’ they were dressed nicely,” says Edmonds.

“When I grew up you’d see it in gangs and see it in less than savoury environments.

“I went home that night from work and I texted my mum to say you’ll never believe what i saw.”

So began a journey for the mother and son which saw them both receiving facial moko.

Edmond’s plan had always been to eventually cover his entire body in moko and he had already decorated his arms. Having planned to have some placed on his legs (a traditional place for men to wear moko) he decided to bite the bullet.

“I thought, why am I bothering with the modern placements?

‘Why am I letting people tell me how to practice my own culture?

“I messaged my mum and I said mum let’s get our faces done, who cares? No one can tell us anything.”

The work on raising the profile of indigenous culture and facial tattooing is ongoing in public life around the world.

In New Zealand Māori woman Nanaia Mahuta has brought moko to the role of foreign secretary, while in the US indigenous Alaskan model Quannah Chasinghorse has walked the Met Gala red carpet and starred in Calvin Klein ads sporting traditional facial tattoos.

Meanwhile - in a full-circle moment - Edmonds now makes content on TikTok to inform people about moko.

There is one thing that he won’t talk about though - the meaning of his tattoos. These are secrets guarded by moko artists to ward off aspiring appropriators.

“Growing up, the information regarding real stuff about facial moko was so limited,” says Edmonds.

“It wasn’t until the day I was sitting on the table with my artist and he goes on and on and on about all this information I never knew.

“I asked him why isn’t this available for our young Maori to learn - or rather try to unlearn the lies.

“He said it’s a double edged sword, the intention is to protect the practice. If you make it available out there to the masses then those who wish to appropriate it have the grounds to say they’re doing it correctly.

There are plenty of people to guard from. Celebrities like Rihanna sport Māori-style tattoos (only called moko when worn by Māori themselves), and a scandal in 2018 greeted a white woman in New Zealand who adopted the markings on her face.

“The moko artists who are the people who protect the practice don’t share that info except face to face with people on the day.”

Even far from home on tour in Europe with Alien Weaponry he says he received mostly positive reactions, and his role in the band has inspired him to keep advocating for his culture.

“Since getting a platform it really changes your perspective,

“I’ve always had these beliefs but it’s inspired me to actually speak out about these things.”