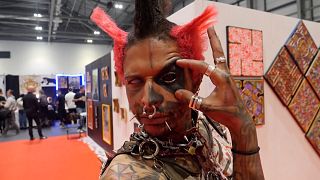 The Big London Tattoo Show took place from 3 to 4 September at London's biggest indoor event space, The ExCel - which is also currently hosting the 'Jurassic World: The Exhibition'.

360 of the world's most talented tattoo artists attended the annual event to show off their inking skills and create amazing masterpieces on enthusiastic tattoo fans.

There has been a noticeable trend over recent years as a growing number of people are choosing increasingly extreme body modifications as body art becomes more mainstream.

Some people are even prepared to get their eyeballs inked in a bid to stand out from the crowd - like Anderson Garcia Rodriguez from Brazil, who calls himself the Zombie Punk.

He's undergone tongue splitting, scarification and facial tattoos, but says the most painful of all was getting his eyeball inked (also known as a sclera tattoo).

The procedure is performed by injecting ink with a needle underneath the top layer of the eye onto the sclera, from where the ink then slowly spreads to cover the sclera.

"It's so painful because it's four needles and I didn't receive an anaesthetic. Yes, I stayed like ten days, not blind, but nearly. But after this I can see normally. No problem," Rodriguez told AP at the tattoo show.

Another striking figure in attendance at the event was Resurrection Joe.

A tattoo fan and a cosplayer, he has written an entire story for his creation, Resurrection Joe, a sort of time-travelling, Shamanistic zombie.

Resurrection Joe has been into the tattoo scene for many years and has watched it explode in popularity.

But he yearns for a time when the body art was truly a sub-culture.

"Me personally I got tattooed quite a long time ago when it was still part of the tribe, if you like, before the footballers brought it into the mainstream. I hate you David Beckham. And now everyone has them," he said.

Cool alert! Tattoos you can listen to