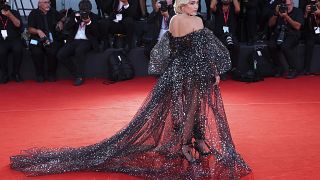 The 79th Venice International Film Festival has come to a close and while it is the cinematic bellwether for the rest of the year (and up to next year’s awards season), the stars were out in full force this year, especially compared to two pandemic years during which the glitz and glam wasn’t the priority.

It’s time to look back at this year’s looks – the highs and lows of red carpet gowns and suits.

The star of the Marilyn Monroe biopic Blonde showed up to the premiere wearing a plunging, pink plissé Louis Vuitton gown and she looked phenomenal. It wasn’t over the top, but she managed to pull off a look that is both graceful and iconic.

This is the look everyone was talking about this year. It broke the internet and proved quite divisive, but we here at Euronews Culture give it two thumbs up. Much like Harry Styles, Chalamet has embraced the gender fluid style and his backless red jumpsuit (with matching shiny scarf) from Haider Ackerman at the Bones And All premiere gave off an ungodly mix of sexy Mr. Tumnus and mad aunt at a wedding.

When’s he’s not genuinely spouting nonsense during press conferences or allegedly spitting on his Don’t Worry Darling co-stars, Harry Styles can don Gucci like no one’s business. The beige double-breasted suit, neckchief and flared trousers worked, but we’re not sure how we feel about the oversized origami collar that he wore with his navy-blue blazer on the red carpet. Those OTT 70s pointy edges would have anyone’s eye out.

The Golden Lion for Best Dressed Actress goes to Jodie Turner Smith, for all her outfits on the Lido this year. Her custom Harbison outfit at the screening of The Whale was a particular highlight, as was her green-gloved opening ceremony gown and the multicoloured Christopher John Rogers dress at the Bardo premiere.

Verdict: Give her all the awards and let’s just been done with it.

A close second for that imaginary prize Jodie Turner Smith just won would be Florence Pugh for her threads at the Don’t Worry Darling premiere. This Valentino number was stunning: incredible cut, gorgeous embroidery and the feather shoes worked wonders.

Most Stylish Actor on the Lido this year goes to Chris Pine. Again, beyond all the Don’t Worry Darling “scandals” (the main and unspoken one being the absence of a comma after the ‘worry’ in the title), his perfectly tailored Ralph Lauren ensembles gave off 1960s vibes and the use of chocolate brown was a red carpet highlight. Only bum note: brown loafers with no socks is a sure sign of villainy and nefarious scheming.

Verdict: Winner, but could someone check if Pine has a Bond villain lair somewhere?

No. Georgio Armani or not, no. No to the baggy pants on the red carpet, no to whatever’s happening with the lining of that white jacket. No. Sorry, Mr. Stokes, come back next year.

Every single appearance of Tessa Thompson on the red carpet this year on the Lido was mesmerizing. Special mention for the effort required for this green number – must be a nightmare to sit in, and how on God’s toast anyone manages to look effortlessly upright in those heals is beyond all comprehension.

Less is often more, and Brendan Fraser celebrated his return to the big screen this year with The Whale by donning a sober, elegant, well-fitting suit and it worked wonders. Welcome back, Mr Fraser – we’ve missed you.

Speaking of well-fitting suits, what’s going on with several-sizes-too-large shirt here? Brad Pitt may have come to the Lido to support the Blonde team for the premiere, but we’ve come to expect better from you, signore.

The director of Call Me By Your Name, Suspiria and this year’s Bones And All arrived in Venice wearing a bespoke shirt with an inversed Bernardo Bertolucci print. The rest of his Loewe outfits this year left a lot to be desired, but just for this shirt, bravo Luca!

Verdict: Call Me By YOUR Name.

Cate Blanchett made her 79th edition debut in a black velvet Schiaparelli couture jumpsuit with a bouquet sprouting neckline. So, let’s recap: Blanchett can out-act pretty much anyone; her performance in Tar is already generating Oscar buzz; AND she can outshine pretty much anyone in front of the paps as well?

Verdict: Some people need to leave some raw talent for others. At this point it’s just greedy.

Known for her outlandish outfits, Tilda Swinton kept it comparatively sober this year for the premiere of the eagerly anticipated The Eternal Daughter. Compared to previous red carpet appearances, this shimmery lilac number by Haider Ackerman (him again - the loop is looped) was classy but hardly showstopping.