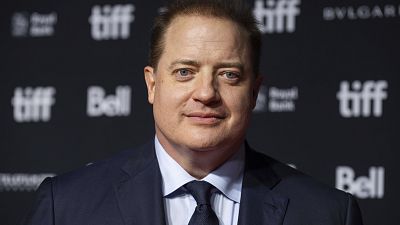 Brendan Fraser has confirmed that he will not participate in the Golden Globes next year if he is nominated   -   Copyright  Arthur Mola/2022 Invision   -
By David Mouriquand  •  Updated: 17/11/2022

This year has seen the return of beloved actor Brendan Fraser to the spotlight, thanks to his acclaimed performance in Darren Aronofsky’s The Whale.

The film, based on the play by Samuel D. Hunter and which premiered in Venice, received a six-minute standing ovation at the festival that reduced the actor to tears.

Fraser plays morbidly obese man who desperately tries to reconnect with his daughter. It is his first leading role since 2013 and marks a triumphant comeback for the Mummy trilogy star, which many are dubbing “The Brenaissance.”

And rightly so, since Fraser’s performance has been praised to the rafters and reminds audiences to what extent he’s been missed from the big screen. He is seen as a clear frontrunner when it comes to the upcoming awards season, with many pundits already betting that the Oscar for Best Actor is his to lose.

However, Fraser confirmed to GQ magazine that he will not participate in the Golden Globes if he is nominated, due to his accusation that Philip Berk, former president and member of the HFPA (Hollywood Foreign Press Association), sexually assaulted him at a 2003 luncheon at the Beverly Hills Hotel.

“No, I will not participate… It’s because of the history that I have with them. And my mother didn’t raise a hypocrite. You can call me a lot of things, but not that.”

Fraser has previously detailed his mental and physical health issues following the incident, saying that his experience with Berk “made me retreat” from Hollywood. It also made him feel like “something had been taken away from me.”

Following Fraser’s accusation, the HFPA opened an investigation into the matter, which GQ reports ended with the HFPA proposing Fraser sign a joint statement that read: “Although it was concluded that Mr. Berk inappropriately touched Mr. Fraser, the evidence supports that it was intended to be taken as a joke and not as a sexual advance.”

Fraser refused to sign, and Berk remained a voting member of the HFPA.

Berk never faced any sort of disciplinary action from the organization, but was eventually expelled from the HFPA over calling Black Lives Matter a “racist hate movement.”

The welcome comeback and the return no one asked for

While there's every reason to celebrate the comeback of Brendan Fraser, there's one return that we could have done without.

The Golden Globes are back next year on 10 January, after two years of upheaval which started when the Los Angeles Times published a 2021 report that revealed that the HFPA had no Black members.

It was taken off the air by broadcaster NBC and returned without a ceremony this year, with the non-awards handed out during a scaled down and non-aired ceremony at the Beverly Hilton.

Now, however, NBC has stated it is committed to broadcasting the ceremony next year, prompting the question why anyone in the industry would continue to entertain the HFPA or decide to prop up their already terrible reputation as an allegedly corrupt and provenly non-diiverse group of non-influencers who dish out awards to the highest bidders.

Fraser added that “at the moment” he does not believe in any of the reforms the HFPA has made in the last year, and his statements can only be applauded.

Time will tell whether celebrities who boycotted the awards will come crawling back or if the industry will listen to people like Fraser, whose career could have bypassed a comeback had the systemic abuse inherent to the Hollywood system been tackled head-on.

For the time being, here is the trailer for The Whale:

The Whale comes out in cinemas in the US next month and begins its European theatrical rollout in the first quarter of 2023.