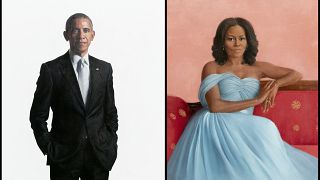 Barack and Michelle Obama returned to the White House for the unveiling of their official White House portraits - marking their first joint visit to the building since they left in 2017.

The portraits were presented in an emotional ceremony hosted by President Biden and First Lady Jill Biden in the White House East Room.

"With Barack as our president, we got up every day and went to work full of hope for real, full of purpose, and excited about the possibility before us," Biden said.

"There are few people I've ever known with more integrity, decency and moral courage than Barack Obama."

A look at the portraits

President Obama's image was painted by American artist Robert McCurdy and Michelle Obama's portrait was painted by Sharon Sprung, who describes her work as "contemporary realism."

McCurdy says the "stripped down" style of his works helps create an "encounter" between the person in the painting and the person looking at it.

He usually present his subjects without any facial expression and standing against a white background, which is how America's 44th and first Black president is seen in a black suit and grey tie.

Speaking at the ceremony, Obama said what he loves about McCurdy's work "is that he paints people exactly the way they are, for better or worse."

The former first lady's portrait, painted by Sharon Sprung, depicts her seated on a sofa in the Red Room, wearing a formal light blue dress.

During the ceremony, Obama praised President Joe Biden - his vice president for eight years - as someone who became a "true partner and a true friend.

And he added it's "America's good fortune" to have Biden as president.

Obama then led a standing ovation for Biden and said, "Thanks to your decency and thanks to your strength - maybe most of all thanks to your faith in democracy and the American people - the country's better off than when you took office."

The presidential portrait unveiling is a historical event - having been organised by the White House Historical Association since 1965.

Recent tradition, no matter political affiliation, has had the current president genially hosting his immediate predecessor for the unveiling

"What's significant about these ceremonies is there's a long-standing tradition where current president hosts the immediate past president to unveil their official portrait," explained Darlene Superville, a White House reporter for AP.

So why has Obama's ceremony only happened now?

Barack Obama's presidential successor, Donald Trump, refused to host any kind of ceremony for his predecessor due to the contentious and bitter nature of their relationship - therefore leaving the first Black president unacknowledged in the White House's portrait collection.

While Obama largely maintained a dignified silence on his thoughts towards his Republican successor, Trump continuously criticised Obama, even accusing him of wiretapping the Trump Tower.

“Terrible! Just found out that Obama had my ‘wires tapped’ in Trump Tower just before the victory. Nothing found. This is McCarthyism!” tweeted Trump ahead of the 2016 election, in one part of a six-tweet tirade towards Obama.

Trump also supported the “birther” movement, which accused Obama of not being born in the United States.

Despite Trump’s disregard for tradition, portraits of Barack and Michelle Obama were unveiled at the National Portrait Gallery in Washington DC, in 2018.

The artworks which feature distinctive styles and bold colours, were completed by Black artists Kehinde Wiley and Amy Sherald.

They're currently on a national tour and scheduled to return to Washington in November.

It is still unclear whether President Biden will host a ceremony to unveil Donald Trump and Melania Trump's portraits, which are currently in the works.

At a White House briefing on Tuesday 6 September, a reporter asked press secretary Karine Jean-Pierre if President Biden would hold a ceremony for Trump if the portraits of him and former First Lady Melania Trump are ready during Biden's current term.

Jean-Pierre deferred the question to the White House Historical Association.

"They lead the process on official portraits for both presidents and their spouses. So that question goes, lies with them," she said.