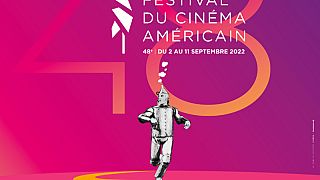 Hollywood comes to the boardwalk of Deauville for the 48th edition of the American Film Festival, starting today and running until the 11 September.

From indie US cinema to 2022 festival favourites, this year will see plenty of stars gracing the French northwestern city in the Calvados commune.

According to the festival director Bruno Barde’s statement, the festival “remains faithful to the absolute necessity of supporting and promoting this jubilant art that makes us so happy in the fecundity of the emotions and the better living together of the cinema."

A bold declaration of love is reflected in an eye-wateringly strong star-spangled programme.

A depressing rarity on the festival scene is the lack of gender parity within main competition sections.

Despite commitment to gender parity as part of new diversity targets, A-list festivals’ Competition selections have still been falling pathetically short. Both Cannes and Venice have managed to tally five female directors in their Competition strands this year, a far cry from the 50/50×2020 parity pledge the festivals committed to in 2018…

But not for Deauville, whose competition line-up is split 50/50 between male and female filmmakers.

A shame that we’re still at a stage where this deserves applause, but it’s a statistic worth mentioning (and cheering).

Beyond parity figures, the 2022 competition promises much. Between coming-of-age stories and psychological thrillers, the 13 films have something for everyone.

Hot tickets include John Patton Ford’s Emily The Criminal, which sees a young woman trying to escape her debts while spiraling down into the criminal underworld; Chloe Okuno’s Hitchcockian thriller Watcher, about a young American woman moving with her Romanian husband to Bucharest only to quickly suspect that her neighbor might be a serial killer; and Charlotte Wells’ debut film Aftersun.

Aftersun is a deeply moving autobiographical tale of an 11-year-old girl (Frankie Corio) on holiday with her father (_Normal People_’s Paul Mescal) in Turkey. Produced by Barry Jenkins (Moonlight, If Beale Street Could Talk) and having premiered in Cannes earlier this year, it’s a sensuous and quitely powerful father-daughter story, which confidently puts Wells on the map as a talent to keep a close eye on. It also features a terrific 90s soundtrack that will remind you quite to what extent All Saints and Catatonia have and always will be brilliant.

A recurring theme in this year’s line-up is sibling dynamics, with Jamie Sisley’s Stay Awake, about two teenage brothers wrestling with their mother’s prescription drug addiction and the wonderful film The Silent Twins, by Agnieszka Smoczyńska, best known for directing the killer mermaid musical spin on The Little Mermaid, The Lure.

Letitia Wright and Tamara Lawrance star in this dramatization of June and Jennifer Gibbons’ life story, chronicling how the twin sisters moved with their family to Haverfordwest in Wales in 1974. The lack of acceptance from the overwhelmingly white community has an impact on the girls; without external comfort, they turn inward and their isolation gradually spirals into delusion and crime. No more shall be spoiled here, but this engrossing story (which also premiered in Cannes) about institutional racism and discrimination features two knockout performances that are worth the price of admission.

Outside of the Competition section, several films have been drafted from Berlin, Cannes and the ongoing Venice Film Festival to screen in the Premiere selection.

Phyllis Nagy’s Call Jane, which screened at the Berlinale in February, stars Elizabeth Banks and Sigourney Weaver and tells the real-life story of women’s rights in 160s America, while Claire Denis’ latest film Stars At Noon - a polarizing watch on the Croisette this year - might be worth skipping in favour of Lukas Dhont’s heartbreaking Close.

Then there’s the 2022 Palme d’Or winner Triangle of Sadness by Ruben Östlund. This frequently hilarious socio-political satire sees Östlund continue to stretch his satirical muscles after skewering the male ego in Force Majeur and the art world in his first Palme d’Or-winning film, The Square (2017). Triangle of Sadness is a more broad strokes affair, which targets the fashion industry, influencer culture, capitalism and the entitlement of the obscenely rich. It’s overlong and heavy-handed, but it hits all of its targets with panache, adding a smattering of Pythonesque humour to the mix.

Tragically, it was reported that the female lead of the film, Charlbi Dean, passed away this week.

The 32-year-old South African model and actor had a recurring role on _Black Lightning,_and Triangle of Sadness was her breakout role. In the film, she plays Yaya, one of the uber-rich guests invited for a cruise on a superyacht that ends with survivors stranded on a desert island and societal roles reversed.

It’s worth catching the film at Deauville for the opportunity to celebrate her work and to mourn the loss of a promising on-screen talent.

Starring Florence Pugh, Harry Styles and Chris Pine, Don’t Worry Darling is a paranoia-fueled mind-bender with echoes of Stepford Wives that should delight cinemagoers looking for a perfect combination of sexy and sinister.

As for Blonde, what else is there to say about one of the most anticipated titles of the year? It could very well be the daring awards juggernaut to beat this year and it’s hard to underplay the buzz surrounding the film, not least because of its NC-17 rating that promises controversy and a bolder approach to the life of an icon.

Ana De Armas, who plays Monroe and has seen her star on the rise with roles in Knives Out and No Time To Die, will receive this 48th edition’s Hollywood Rising Star Award.