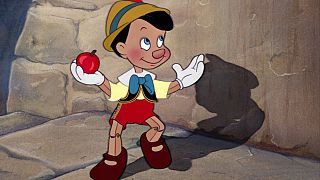 Two Pinocchio films from both Disney and Netflix battle it out in the second half of this year   -   Copyright  Disney
By David Mouriquand  •  Updated: 26/08/2022

Earlier this month, streaming subscriber figures were released and showed that Disney+ had edged past Netflix for the first time.

The House of Mouse amassed 221 million customers, overtaking their main competitor who currently count some 220 million streamers. Not much of a difference, granted, but considering Netflix have been haemorrhaging viewers and are struggling to add more subscribers of late, the numbers are telling.

To add to this accomplishment, it’s worth keeping in mind that Netflix started streaming in 2007, while Disney+ only launched a full decade later; it’s taken them a total of five years to achieve dominance.

But the war of the streamers is taking a new dimension in the second half of this year, one which will see each entertainment behemoth step into the ring with their own separate Pinocchio films.

But why do movie studios release near-identical films on the same year? And which wooden boy is worth watching?

This isn’t the first time this doubling-up occurs. Rival studios often get the irrepressible itch to release similar films in the same year.

Granted, twin films can be genuine coincidence or the result of studios wanting to cash in on a popular trend without resulting to plagiarism; there is bound to be some overlap between creatives, and release dates are unpredictable. However, it’s happened so many times over the years that all benefit of the doubt is jettisoned out the window, leaving viewers with the feeling that there is some intentional tug-of-war behind the scenes and that corporate espionage doesn’t seem too conspiracy theory leaning.

The instances of twin films are endless, with some of the more egregious examples being 1998’s Deep Impact / Armageddon comet-asteroid extravaganza released just two months apart (with Armageddon suspiciously going into production just a handful of weeks after Deep Impact was announced); 2013’s “What if we did Die Hard in the White House?” Olympus Has Fallen / White House Down double bill; or the somewhat troubling 2018 twin release of the dramas U-July 22 and 22 July, both based on the 2011 Utøya massacre in Norway.

Duelling films occur most frequently when it comes to the based on real-life movies.

Famous figures enjoy a cultural comeback and studios see an opportunity to repeatedly clobber popular culture on the head by choosing to celebrate the life of an icon and ride a zeitgeist wave.

See: the twin 2006 Truman Capote biopics Capote and Infamous; a double helping of 2016’s Marguerite / Florence Foster Jenkins, both about the famous socialite who fancied herself something of a singer despite being tone deaf; the Winston Churchill overload we got in 2017 with both Churchill and Darkest Hour; and 2018 becoming the year of Winnie The Pooh author AA Milne, with Goodbye Christopher Robin and the adventurously titled Christopher Robin.

It's a predictable-if-fascinating cinematic trend that repeats like clockwork.

In the case of Pinocchio, it feels even more galling as there has been a grand total of 34 films about the wooden marionette who wanted to be a real boy since 1911.

But sometimes a story is so good, you might as well tell it twice. And this year, Disney+ and Netflix are making the most of rights being in the public domain and taking their game of one upmanship to the next level.

“You’ve got a Pinocchio movie in the pipeline? Let’s see how you like our take...” Cue: maniacal laughter from the studio bean counters.

Which wooden boy will you be watching?

Set in 1930s Fascist Italy, this dark fantasy will see the wooden puppet struggling to live up to his father’s expectations and recruited into the military because the fascists see the unkillable puppet as the perfect soldier. Tonally speaking, Del Toro is sticking more closely to Pinocchio-creator Carlo Collodi’s original mood, and making it a prolifically bleak affair that has more in common with a Grimm fairytale rather than a heartwarming adventure story.

Starring the vocal talents of Ewan McGregor, Cate Blanchett, Tilda Swinton, Christoph Waltz, Ron Perlman and _Stranger Things_’ Finn Wolfhard, this feels like a subversive take on a classic story; and as the trailer promises, it’s “a story you may think you know, but you don’t.”

Del Toro even compared his take to the timeless horror story of Frankenstein in an interview with Vanity Fair, adding that “the virtue Pinocchio has is to disobey. At a time when everybody else behaves as a puppet—he doesn’t. Those are the interesting things, for me. I don’t want to retell the same story. I want to tell it my way and in the way I understand the world.”

Additionally, Pinocchio is part of a multi-deal Del Toro has with Netflix, a contract that essentially lets him produce what he wants, thereby feeling personal and less corporate.

A few months after Netflix’s trailer, Disney dropped their own. Their Pinocchio is a live-action remake helmed by Robert Zemeckis (Back To The Future, Forest Gump) and starring Tom Hanks as Geppetto.

In contrast with the nightmarish tinges of Netflix’s Pinocchio, Disney’s version does seem a little more corporate. It is banking on nostalgia to win the streaming wars, with the trailer featuring a rendition of ‘When You Wish Upon A Star’. Magic sure, but saccharine and overdone to the point of exhaustion at this point.

This Pinocchio also feels at a disadvantage, as Disney have been gratingly going through their back catalogue and churning out live-action remakes over the years. At worst, are completely unnecessary (Dumbo, Cinderella, Beauty and the Beast); at best, just fine (Aladdin, Mulan). Another classic tale conversion feels like a campaign that’s distinctively running out of steam.

That said, Zemeckis can confidently tug on the heartstrings when he wants to, has experience in animation, and the cast is just as impressive as Del Toro and Gustafson’s version, with Joseph Gordon-Levitt, Keegan-Michael Key and Benjamin Evan Ainsworth coming out to play.

As you can tell by those descriptions and both trailers, the competing movies couldn’t be more radically different in tone and, although the character of Pinocchio is associated with Disney and the seminal 1940 animated feature, Netflix’s take seems like the far more intriguing proposition.

Considering the distinctive and transportive worlds that Guillermo del Toro has conjured up over the years – from The Devil’s Backbone to Pan’s Labyrinth and The Shape of Water – the odds are that the daring vision will get audiences more excited compared to what seems like Zemeckis’ play-it-safe approach.

It’s too soon to say which puppet will prevail, and judgement must be suspended until both have been seen.

The two versions will doubtlessly resonate with different viewers: those looking for a comfort trip will be wooed by Disney, and those looking for the simmering unease at the heart of all fairytales will gravitate towards Netflix.

Still, as fascinating as it is to witness this Pinocchio-shaped development in the streaming wars, two final questions do linger.

No matter how boundless the ability of certain artists to inject new life into known intellectual properties, doesn’t this all feel like a slightly cynical and unoriginal tactic to up streaming numbers? And don’t audiences deserve something truly original at a time when all studios tend to be banking on easy-win blockbusters and nostalgia-baiting legacy sequels to get bums on seats and eyes on screens?

Check out the video above to hear about Cineworld’s bankruptcy woes and how streaming platforms are taking over and fighting over the dominance of their Pinocchio.