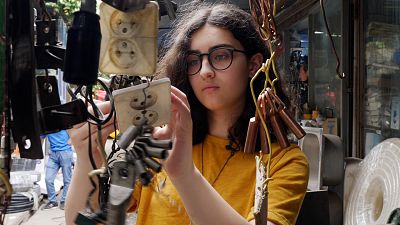 Mariam Ben Nakhi is not your usual teenager. Unlike most 13-year-old girls, she has a passion for fixing phones and computers. After school, Mariam can be found tinkering away in her family’s workshop in Tbilisi. Peering into a magnifying glass, the Georgian native connects tiny intercrate parts to breathe life back into defective devices.

“I like to replace the batteries or clean the fans, replace the paste that is used for cooling down the computers. I like how concentrated I am with connecting the small pieces,” she tells Scenes.

“When they took the screen off, there were a lot of small parts that I was interested in. Also, these wires just going through the computer and I was curious about them. I wanted to how the computer worked,” she recounts. “I was like, let me just ask him about what this is and what that is, and maybe I could help with the things that he's doing.”

“Mariam is a naturally very curious person. I wish I could say that I inspired her to follow this path, but it really came from her,” says Thomas. “The most important thing for me is that she feels free to pursue her interests without any limitations and that she's not afraid to feed that curiosity,” he adds.

It didn't take long for word to spread and referrals to start flowing in. Friends of friends began dropping off their broken hardware in the hopes the duo would restore them back to life. “At some point, we realised that we were one Facebook page away from an actual business and so we made it official, and now it is very much a full-time endeavour,” says Thomas.

In 2021, the father-daughter team launched their family business. “I called it ‘Mariam's Computer Repair’, not only is it projecting the fact that women can repair things, which I think is critically important, but it's also a point of pride for us as a family,” explains Thomas.

The shop quickly became the go-to electronic repair hub in the Georgian capital. “We're a little bit out on the frontier when it comes to fixing modern tech in Tbilisi. Your parts are two weeks away, and so that really motivates you to be very resourceful, creative sometimes in repair,” states Mariam’s father.

While the father-daughter duo fix consumer electronics for a living, their real passion lies in salvaging and restoring old Soviet electronics from the overflowing flea markets. “The markets for old tech in Tbilisi are glorious, you can find such gems. There's nothing digital around and there are moments that feel a little bit like Bladerunner,” Thomas recalls.

The family also run a YouTube channel, ‘Workshop Nations’, showcasing reconstruction videos of vintage electronics. The twosome created their channel, partly out of fascination for the retro tech, but also as a way to encourage a culture of repair and restoration.

“What goes through my mind when I look at old parts in Soviet electronics, is how was this made and how did it survive? There are these small TVs that my dad restored and it looks like treasure,” Mariam explains.

Mission to save retro tech

Many soviet electronics are dismantled and ripped apart for minuscule bits of gold used on capacitors and circuit boards. The pair’s mission is to save as many vintage electronics as possible.

“The world of Soviet electronics was a very isolated, sort of sealed-off world. Sure, there was influence from the West, but for the most part, the Soviet Union was behind the Iron Curtain and so you have these very talented engineers developing this tech,” explains Thomas. “In 200 years’ time, they're going to look back on the 1970s and 1980s, as the moment that human civilisation changed. That was the birth of the home computer,” he adds.

As a family, they feel it's their duty to preserve these electronic wonders from being erased from history. Mariam hopes their online videos will raise awareness about electronic waste and encourage other children to think: "Let's fix it" before throwing away their broken gadgets.