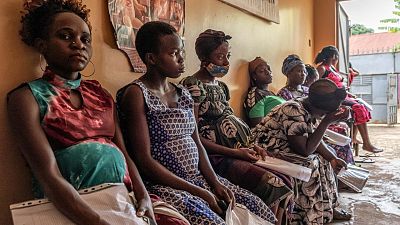 As a young girl, Phyllis Kyomuhendo knew that someday she wanted to save lives. Thinking this meant becoming a doctor. She worked hard to get into medical school and quickly realised radiology was her calling. “Radiology was a great marriage between saving lives and dealing with machines,” she recalls.

As a student, she travelled to rural Uganda for community placement where she was expected to put into practice what she was learning, but there was only so much she could do with the existing infrastructure.

“I was dealing with CT scans, MRI's, X-rays, ultrasound and all these are big machines that have huge power consumption. No electricity, no water, generally, your typical rural village... it was not possible,” she tells Scenes.

Phyllis couldn’t help but feel frustrated as she watched women die from preventable conditions undiagnosed due to the lack of equipment. “I felt like I was useless,” she says.

The problem goes beyond this small community. According to government figures, at least 16 women die every day from pregnancy-related complications in Uganda, but ultrasounds could have prevented at least seven of these deaths.

Phyllis felt a deep need to address these challenges and change the situation in areas with limited resources. Along with some colleagues, she conceptualised a solution for affordable ultrasound services for low-income communities.

M-Scan is a low-cost and energy-efficient device that provides affordable ultrasound scans. It’s as portable as a charger and can be connected to a laptop, tablet, or a mobile phone and yet “does all the scans that a normal conventional ultrasound machine can do,” adds Phyllis.

Their motto: ‘Save a mother, save a life’ reveals their mission - to help fight and reduce mortality rates among pregnant women, by detecting risks and complications as early as possible. Phyllis and M-Scan’s message is clear, no mother should die during childbirth.

Before M-Scan, a single ultrasound machine serviced the whole Kalangala District with its population of 80,000. Mothers-to-be had to travel thousands of kilometres just for a scan. Many would not even try to make the time-consuming and costly journey, while others relied on physical examinations alone.

“So far, we have scanned over 1,800 pregnant women and counting and we have detected over 300 complications,” says Phyllis. “In most of the communities we go to, this is the first time that someone is having an ultrasound in their lives. And the way they beam up when they see their baby on the screen is just something that I cannot explain in words, it's the best feeling ever,” she adds.

Hopes for the future

Phyllis has been featured and won awards in different categories on the 2021 YALE Africa Startup Review, emerging as winner of the 2018 TechCrunch Startup Battlefield Africa and 2019 Johnson & Johnson Africa Innovation Challenge.

This passionate entrepreneur and innovator, hopes that M-Scan can expand to neighbouring countries with similar challenges and inspire the next generation helping to build the future of Africa.