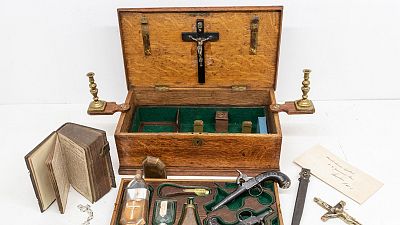 Ever get that feeling when you look around your house and think, you know what would go great with that coffee table - my very own vampire-slaying kit? No can’t say we have either, but one lucky person in Derbyshire, UK, has acquired just that, after paying £16,900 (€19,900) at auction.

It can be fascinating to see what sorts of things go under the hammer at auction. And a vampire-slaying kit seems positively tame in comparison to some of the more eccentric things people have bid on in the past:

First, a bit more on that kit. Sold to an unnamed private buyer, it consists of a lockable box containing tools and holy objects to ward off vampires.

Two brass crucifixes on the lid act as a sliding secret locking device, while inside there are more crucifixes, a matching pair of pistols, a brass powder flask, holy water, a gothic Bible, a wooden mallet, a stake, brass candlesticks, rosary beads and Metropolitan police paperwork from the period.

“The task of killing a vampire was extremely serious and historical accounts suggested the need for particular methods and tools,” said Charles Hanson, the owner of Hansons Auctioneers, in a statement. “Items of religious significance such as crucifixes and Bibles were said to repel these monsters, hence their presence in the kit.”

Bids for the vampire-slaying kit came in from across the globe, Hanson said, including France, America and Canada.

"Objects like this fascinate both collectors and people in general – and this vampire kit had particularly interesting provenance," he added. "Whether through fear or fascination, it’s interesting to know a member of the highest aristocratic social order, a man with a place in the House of Lords, acquired this item."

"It reminds us that the vampire myth affects people from all walks of life."

A lock of Elvis Presley’s hair

From vampires to the King of Rock and Roll himself - Elvis Presley fans certainly seem all shook up for the singer’s hair, locks of which often go up for auction.

The locks are believed to be from when Presley had his hair cut to join the US Army in 1958.

Chicago-based Leslie Hindman Auctioneers said the hair had originally been given to the late Gary Pepper, president of the Tankers Fan Club, to mail out to fans, Reuters reported.

The hair was collected by one of the star’s hairdressers Homer Gilleland, according to Hansons Auctioneers, the auction house overseeing the sale.

According to a letter of provenance with the hair, Gilleland got to know Elvis in the early 1950s as he used to cut his mother Gladys Presley’s hair at Goldsmith’s department store in Memphis.

“Hair has always been a wonderful keepsake as it lasts forever,” said Claire Howell, music memorabilia valuer at Hansons.

“Elvis was the King of Rock and Roll,” said Howel. “But his hair had an impact on the world, too.”

“At a time when men didn’t dye their hair, he used gel, hairspray, colour - whatever it took - to achieve his rockabilly look. The girls swooned and, thanks to Elvis, a hair salon for men opened in Hollywood, unheard of back then. He was a ground-breaker in more ways than one.”

The Beatles star had given the tooth to his former housekeeper Dot Jarlett to give to her daughter who was a huge Beatles fan, the Independent reported at the time, adding that the tooth was sold with a sworn affidavit signed by Jarlett to prove its provenance.

"It's by far the most weird and wonderful item we have ever had submitted to us. It was a very tense bid towards the end and a huge cheer rang out when the final bid was made,” the news outlet reported Paul Fairweather, an auctioneer at Omega Auctions in Stockport who sold the tooth, as saying.

Fine art is no stranger to auction houses, but this particular painting auctioned by Sotheby's drew attention as much for its artistic merits as for its huge size and subject matter.

At 1.9 by 2.6 metres, the painting “My Wife's Lovers” by Austrian artist Carl Kahler is believed to be the world's largest painting - of cats.

The piece was commissioned by cat enthusiast and millionaire Kate Birdsall Johnson of San Francisco in the early 1890s, according to Sotheby's catalogue. Johnson loved cats, and housed 350 cats in her 3000-acre summer residence in California, says the catalogue. There, her pets were cared for by a troop of servants hired specifically for this purpose.

It was so big and heavy that Sotheby's had to build a special wall to display it, reported the news outlet, adding that when hung on a normal wall, the painting pulled out the nails.

It is assumed that Kahler sketched each cat individually, with Sotheby’s Polly Sartori telling CBC: "No way did 42 cats sit still to have their portrait painted.”

The first ever text message (sort of)

And from the physically huge to the questionably there at all - the first SMS ever sent over a mobile phone made headlines after it was sold last year as an NFT at auction.

The SMS was a 15-character message sent to Vodafone employee Richard Jarvis wishing him "Merry Christmas".

The buyer, whose identity was not disclosed, is a Canadian involved in the tech sector.

Mobile network operator Vodafone said it planned to donate its proceeds from the sale to the UN's refugee agency.