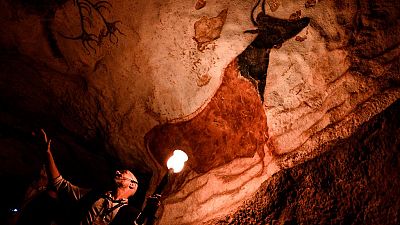 A machine learning (ML) tool has been developed by researchers to help identify rock art in remote, hard-to-reach locations.

The ML model developed by researchers can scan photographs to identify potential rock art, which can then be evaluated by a human expert.

ML is a subfield of artificial intelligence which allows applications to imitate the way that humans learn, without explicit programming. Instead the computer accesses data to learn for itself.

"The tool is useful because of its speed in helping identification and automating what were formerly manual tasks, which are laborious and expensive,” a spokesperson from Griffith University in Australia told Euronews.

Dr Andrea Jalandoni, a digital archaeologist at Griffith University, led the research. Her team used hundreds of images of rock art within the country's rugged landscape to train the ML model to detect whether painted rock art was present within the image.

“Some of these sites are not easily accessible, so alleviating some of the time, effort and expense to mount some explorative missions is of huge value to this type of archaeological research in some of the most remote areas of Australia,” Dr Jalandoni said in a press release.

“Once our ML model picks up whether an area photographed potentially contains previously undiscovered rock art, scientists can then go in and ground-truth the site to verify if there is rock art present and report on it further.”

The ML tool they developed has an 89 per cent success rate.

The rock art they used to train the ML model was found within Kakadu National Park, Australia. The researchers worked closely with the traditional elders of the park on the study.

"Rock art is globally recognized as significant, yet the resources allocated to the study and exploration of this important form of cultural heritage are often scarce," wrote the researchers in their paper.

"In areas where numerous rock art sites exist, much of the rock art is unidentified and therefore remains, unrecorded and unresearched," they added.

The tool could also be trained to detect rock art found in different regions around the world.

According to Dr Zaidi, their work shows that ML an AI can bring much to archaeological research, potentially paving the way for "ground-breaking research" in the coming years.

"We are excited about the second phase of our study," she said.

Automating parts of the study of rock art could facilitate rock art research in many ways, such as through object recognition as well as detection and reconstruction, the research team said.

Dr Jalandoni said the findings could also be useful in the development of an app that tourists could use to upload images of potentially undiscovered rock art examples for further analysis.

“If you are a tourist in an area that could potentially have rock art within it and you’re taking pictures, one of the future goals is for us to develop an app where you can add your image to the collection to see if it’s been documented or if it could be undiscovered rock art that needs to be examined,” she said.

“So it would allow citizen scientists on the ground to take part in important archaeological research.”

The findings ‘On the use of Machine Learning Methods in Rock Art Research with Application to Automatic Painted Rock Art Identification’ have been published in the Journal of Archaeological Science.