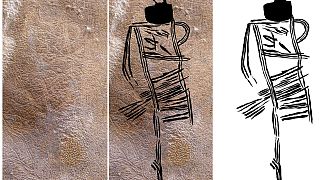 In the depths of an unnamed cave in Alabama, archaeologists have discovered the largest works of cave art in North America.

The actual location of the cave remains a secret, as the archaeologists behind the work are concerned that revealing it would lead to looters and amateur cavers damaging the work.

Somewhere in Alabama, in the depths of a narrow and damp cave, huge works are scrawled into the mud. It’s estimated the artworks were made around 1,000 years ago.

Kept preserved in the mud for a millennium down three miles of damp corridors, just the lightest touch could wipe the artworks away. If it weren’t for the damp stillness of the cave, the art would have likely dried out and eroded away centuries ago. Now, the works are so faint that they are imperceptible by the human eye.

But through the use of 3D scanning photogrammetry, the incredible ancient works are now visible.

The technique is to lie on the cave floor and take multiple photos of the drawings. Then, using 3D modelling to compare and overlap imagery to make a clear picture of the works.

In total, 16,000 photographs were taken to create the models of the ancient drawings.

Now, the archaeologists could study images of snakes and anthropomorphic figures that could have been etched into the mud by a finger.

Describing one of the anthropomorphic figures, one of the archaeologists Jan Simek, Professor at the University of Tennessee, Knoxville, writes:

“The head is triangular with oval projections extending from either side, giving the general aspect of an animal head with pricked ears. The figure's right arm extends outward and disappears into a line of natural flowstone, while the left arm is raised, bent at the elbow, and terminates in a clearly human hand featuring five extended digits.”

Among the animal figures, there was also the drawing of a snake. The diamond pattern on the snake’s body point to it likely being a diamondback rattlesnake, which was sacred to Southeast Indigenous people.

Until now, most of the cave art discovered in North America had been small by comparison at always less than a metre in width. These far larger drawings can be over 3 metres long and give far more detail than previous ones on Native North American culture.

“The most striking aspects of these cave art images are their size and context,” writes Simek et al.

“They are so large that the makers had to create the images without being able to see them in their entirety. Thus, the makers worked from their imaginations, rather than from an unimpeded visual perspective.”

Caves were sacred places to Native Americans from over 6,000 years ago.

“Caves were considered to be pathways to the underworld, juxtaposed with pre-contact cultural landscapes and their large-scale, organised, sedentary communities,” Simek writes.

“In those settlements, Native Americans in the Southeast built mounds, by which they could ascend to the spirits of the upper world for religious interaction.”

“Decorated caves represented the opposite: gateways to the worlds below,” he notes.

From this, he suggests that the large figures inside the cave are potentially underworld spirits. With their ghost-like forms and complex clothing, headgear and position, facing the viewer head-on, he posits they are inhabitants of a supernatural world depicted by Native North Americans.

Although the archaeologists are rightly pleased with their discoveries, the work has only just begun. The use of 3D photogrammetry has opened up massive potential to find more cave art. And the more that they can find, the more historians can piece together the cultures of the indigenous peoples from centuries past.