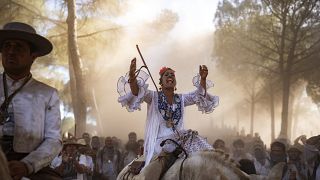 One of Spain’s most historic events returned after a two-year-long hiatus due to the pandemic.

Romería del Rocío is an important religious pilgrimage that has taken place for centuries in the southern Spanish region of Andalusia.

For the past two years, the pilgrimage was cancelled due to the risks of the Covid pandemic.

Tens of thousands of pilgrims came out in force, dressed to impress for the festival. People came in tiered flamenco dresses, crisp riding suits and wide-brimmed Cordoba hats. The huge crowd descended on the tiny Spanish village of El Rocío.

To celebrate the festival, the crowd made up of entire families and friend groups, winds it way across countryside paths and roads either on foot, by horse, or in one of the elaborately decorated horse-drawn wagons and caravans.

What's the pilgrimage for?

The festival has a religious origin, with the pilgrimage ending at the El Rocío village where, legend has it, a statue of the Virgin Mary was found in a hollowed-out tree trunk.

El Rocío means “morning dew” in Spanish, and was established as the sanctuary of the virgin. The festival, which takes place on Pentecost Monday, has the pilgrims bring an effigy of the virgin on a giant float known as the Blanca Paloma, or “white dove”.

“The Rocío is something that cannot be explained. You have to come here and feel it,” said 15-year-old Antonio Carlos Martín Duque, who rode a horse for the pilgrimage.

Instead of dour religious solemnity, the Romería del Rocío is a colourful celebration. The food, drink, costumes, and songs are just as much a part of the festival as the devotion to the virgin.

Organised by a collection of brotherhoods, the pilgrimage attracts young and old revellers with a pervasive sense of joy across everyone to return to the iconic Andalusian festival after two years away.

Antonio Molina Sánchez, 47, from nearby Huelva city, described his family's delight in making the pilgrimage after two years of cancellations. "For a family like ours that live for it, a ‘Rociera’ family, it’s joy.”

Even so, the shadow of the Covid virus lingered. “We are afraid; we have masks in our pockets (but) often the emotions do not let you think, and you go into the crowds without realising it,” he said. “We hope that with three vaccines, and the protection of the virgin, we’ll be safe.”

Although there was a slight hitch with this year’s procession, as the Blanca Paloma float for the virgin’s shrine had a structural problem, there was a palpable joy as pilgrims converged on the white-washed El Rocío with thousands still trying to take in the procession of the effigy.