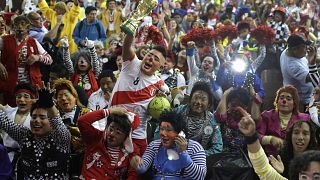 Hundreds of clowns dressed in colourful costumes, wigs and face paint marched through the streets of central Lima on Wednesday 25 May to celebrate Peruvian Clown Day.

The tradition, which started in 2006, returned to Peru's capital after two years of cancellations due to the Covid-19 pandemic.

The celebration was founded in honour of José Alvarez Vélez, better known as "Tony Perejil", a beloved Peruvian clown who died on 25 May 1987.

Who was José Alvarez Vélez?

José Alvarez Vélez, also known as Tony Perejil or the 'Clown of the Poor', set up his colourful circus tent in impoverished neighbourhoods in Lima during the 1970s and 80s.

He was well known for bringing happiness and laughter to the children and adults living there, as well as donating the little money he earnt to charity.

To this day, many citizens in Lima still remember the entertaining clown, who died alone in a hospital bed on May 25, 1987.

In honour of the benevolent man, hundreds of clown enthusiasts from all over the country dress up and parade through the streets of Lima, holding shows and circus performances throughout the day.

This year, one band of merry-makers carried the ashes of one of their fellow clown, Jorge Contreras - known as "Copetin" - who died of pancreatic cancer during the pandemic.

"Today we break our mourning and let him to rest in peace while we return to our colorful suits," said Lerner Diaz, dressed as the clown known as "Little Shadow."