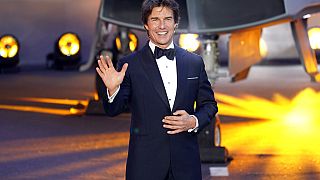 Including international showings, the film's worldwide total is $248 million (€230 million), having opened in 23,600 locations across 62 countries.

“These results are ridiculously, over-the-top fantastic,” said Chris Aronson, Paramount’s president of domestic distribution. “I’m happy for everyone. I’m happy for the company, for Tom, for the filmmakers.”

According to projections, 'Top Gun Maverick' will likely have raked in more than $150 million in the United States (US).

Although one of the most well-known stars in the world, Cruise is not renowned for massive blockbuster openings, despite the frequent long-term success of his films.

His biggest domestic debut before 'Maverick' was with Steven Spielberg's sci-fi thriller 'World of the Worlds', which opened at $64 million (€59 million) in the summer of 2005.

'Maverick' has been well received by film critics, notching up 97 per cent on the online review aggregator Rotten Tomatoes.

Audiences, who were 58 per cent male, also gave the blockbuster a A+ CinemaScore, according to exit polls.

The sequel to the late Tony Scott's 1986 'Top Gun' was originally due to hit cinemas in the summer of 2020.

During this period, Cruise and Paramount remained fixed on a major theatrical release, even as other production companies opted for hybrid releases, involving both theatres and streaming services.

"That was never going to happen," said Cruise at the Cannes Film Festival last week.

The film reportedly cost $152 million (€141 million) to make and a lot of fanfare has accompanied its build-up.

In addition to a premiere on an aircraft carrier in San Diego, US, and at Cannes in France, Cruise has attended a royal premiere in London with Prince William and Kate Middleton, the Duchess of Cambridge.

Female filmmakers shone at Cannes, but parity is still a long way off