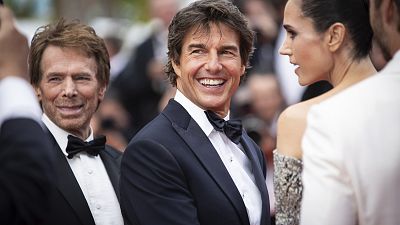 Actor Tom Cruise was greeted with cheers and applause when he arrived at the Cannes Film Festival on Wednesday.

The Hollywood star was in town for the screening of 'Top Gun - Maverick' -  the long-awaited sequel to the 1986 blockbuster.

Cruise was accompanied by actor Jennifer Connelly and other members of the cast and crew, and by way of official welcome, a surprise flyover by French fighter jets.

Directed by Joseph Kosinski, the new film delves into the legend of legendary US Navy fighter pilot Pete "Maverick" Mitchell as he continues to push his limits as a test pilot.

He is tasked with training a detachment of young Top Gun graduates for a special mission that no pilot would have ever imagined.

Room for all genres

The festival is about more than Hollywood blockbusters. There is a significant recognition of lower-budget, independent cinema too, much of it of European origin and other world regions.

One such film being screened this year is the Belgian production 'Le Otte Montagne', directed by Felix van Groeningen and Charlotte Vandermeersch.

It tells the tale of friendship and destiny in the Italian Alps. While Bruno remains faithful to his mountain, Pietro travels the world. On this journey, they experience love and loss, their origins and destinies, but above all, a lifelong friendship.

Another one is 'Tchaikovsky's Wife'. a magnificent portrait of the composer's spouse in late 19th century Russia. It's expected the film will take some of the honours, at least for its dazzling direction.