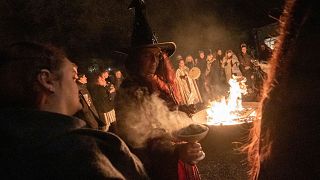 The pagan tradition is believed to help ward off evil spirits and illness for the spring time   -  Copyright  AFP
By Theo Farrant  & AFP  •  Updated: 02/05/2022

Walpurgis Night, also known as 'Walpurgisnacht' and 'Night of the Witches', is a pagan festival celebrated each year on 30 April.

Local variants of Walpurgis Night are observed throughout Northern and Central Europe, in countries such as the Netherlands, Germany, the Czech Republic, Sweden, Finland, Estonia and Austria.

What is the origin of Walpurgis Night?

The origins of the ritual date back to pagan celebrations of fertility rites and the coming of spring.

Traditionally speaking, the celebration is a night to pay tribute to the 8th century Saint Walpurga.

Walpurga, was an English-born nun who travelled to Germany to perform missionary work under her uncle, Saint Boniface.

She has been praised by Christians for successfully warding off pests, illness and witchcraft.

Walpurga is traditionally associated with 1 May because of a medieval account of her being canonised on that date in 870 AD.

Walpurgis Night is celebrated on the eve of the Christian feast day of Saint Walpurga.

In Austria, hundreds gathered this year at Plankenstein Castle in Austria for an evening of music, bonfires and dancing.

"It's a wonderful festival with fire, dance, music, witches, magicians, good food, just joy of life, and a lot of spirituality with card reading and palmistry," explained Sonja Faschingeder, the organiser of Walpurgis Night at Plankenstein Castle.