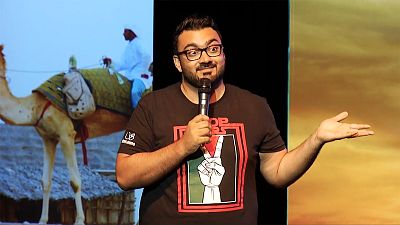 Dubai is fast making a name for itself on the international comedy scene, with homegrown talent keen to shatter stereotypes.

And with more than 200 different nationalities living in Dubai, comedians that come to perform have to learn very quickly. Their jokes need to be as diverse as the audiences.

Emirati comedian Ali Al Sayed and his wife Mina Liccione set up Dubomedy to establish and nurture the comedy scene.

Sayed told Cult: “I get the most backhanded compliments ever. They're like, oh, my god, you're so funny … for a local. Stereotypes? I personally embrace them. And it's all over my comedy.”

Liccione also sees the funny side in stereotypes.

“My boys, they are half Arab and half Italian – born with full moustaches and skinny jeans.”

I'll make you laugh, but then I'm gonna make you think.

But she says that comedy can also help break down barriers and stereotypes are one way of tackling difficult issues.

“I'll make you laugh, but then I'm gonna make you think. So the next time you see a guy maybe dressed like this, you might smile.”

Stand-up comic Tez Ilyas is one of the UK’s fastest rising stars. He agrees that comedy has a power of its own.

“I just want to show people that no matter what your background is, comedy humour is universal and you can use that to break down barriers and show people actually we are just human.”

Gail Clough, co-founder of The Laughter Factory, says she has the best job in the world, providing a platform for international talent to perform in Dubai's more intimate venues.

“I travel around to different festivals, find the best comics that I think would suit the cross-section of people that we have here. Bring them back and make everyone laugh.”

Across town at the Courtyard Playhouse, they pride themselves on training talent in improvisation.

Theatre manager Kylie Schultz said: “We do training courses and we allow people to get on stage and practise the training that they've had with us in front of a live audience.”

Salman Qureshi says the theatre gave him a start in the business.

“If this place didn't exist, I wouldn't exist … “It gives you the right kind of support and training when you're starting out, which is important. Comedy is sometimes very scary to do.”