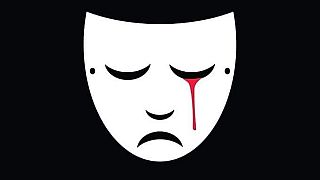 Ukrainian artists and illustrators have been firing back in their own disparate ways ever since the full-scale Russian invasion began.

Some of them, like Andriy Yermolenko, have been active since 2014, some, like Oleksandr Grekhov, used to work in other areas, but have now joined the incredibly industrious “art battalion”.

People share these, often deeply symbolic, images on social media, some pieces have been printed and distributed on billboards all over the country. They stand as fascinating illustrations of a nation at war. Here are ten examples.

On the very first day of the invasion, Russians were trying to occupy Snake Island in the Black sea. It is a small piece of rock, which was under the protection of Ukrainian border guards. Two big Russian warships approached it and told the guards to surrender, but one of the Ukrainian guards replied with the phrase: “Russian warship, go fuck yourself”.

This phrase became a slogan of Ukrainian resistance.

The above poster by Nikita Titov visualises the Russian warship – a Titanic-like Kremlin, sinking in blood.

Two months before the full-scale invasion, Titov started his series of militarised emblems of Ukrainian cities. He incorporated swords in existing emblems end images of city landmarks. Here you can see the sword emblems of Odesa ad Kyiv (horse chestnut is one of the symbols of the capital) and the image of the huge dam of The Dnipro Hydroelectric Station, the landmark of Zaporizhzha. The series covers the majority the main cities in Ukraine's 24 regions (oblasts).

Maksym Palenko is a well-known Ukrainian book illustrator. But now he produces war posters which are very popular on social media.

This poster is called “Sepukkin”.

Here Vladimir Putin commits seppuku (ritual suicide) by cutting the Z letter into his belly. Russian propaganda actively uses Z as a symbol of their “special operation” (which is how some Russians have phrased this war).

Another piece from Palenko is a homage to the iconic scene from Sergei Eisenstein`s film “Battleship Potemkin” (1925), a classic of the Soviet propaganda surrounding the Revolution of 1905.

The famous film scene takes place on the Potemkin Stairs in Odesa where Eisenstein stages people being shot. During this massacre, a recently-orphaned baby in a pram falls down the stairs, a real symbol of helplessness. In Palenko`s poster, the helpless baby in a pram takes the guise of Putin, surrounded by his own dead soldiers.

Another prolific artist in this area is Andriy Yermolenko. On one of his posters, you can see a reconceptualisation of the Kyiv Founders Monument.

According to the legend, the city was founded by three brothers: Kyi, Shchek, Khoryv and their sister Lybid. They arrived on the boat. The monument commemorating this event is iconic, it is located on the bank of Dnipro river. In Yermolenko's version, you can see these four legendary figures recapitulated as well-equipped modern soldiers asking everybody to join in the protection of the capital.

This next Yarmolenko work is dedicated to the tragic fate of Mariupol's Theatre.

The theatre was built during the Cold War era, so there was already a large bomb shelter. Besieged Mariupol used it to hide children. On the pavement in front and behind the building people wrote “Children” in Russian to attempt to warn Russian military pilots.

The tactic didn't work and 300 were reported dead, Mariupol city council said in a statement.

The next poster by Yermolenko is dedicated to Chornobayivka. It is a small village near Kherson known for its military airport. Russians try to use it as an hub of their military logistics, but Ukrainian forces destroyed their equipment there 11 times, according to Oleksiy Arestovych, an advisor to Zelenskyy. In his poster, Yermolenko creates a skull using folkloric patterns from traditional Ukrainian embroidery and pottery.

This artist has also tried to communicate with an international audience.

He created a series of posters for 16 countries trying to convince Europeans to cancel Russia and support Ukraine.

Visually he incorporates the coat of arms of Ukraine (the trident) within the symbols of other countries.

The topic of cancelling Russia and its culture is now more and more popular in Ukraine. On the following poster by Oleksiy Say you can see the reconceptualised coat of arms of Russia - the two-headed eagle: one head is Leo Tolstoy, the other Fyodor Dostoevsky.

This eagle has the legs of a ballerina, and in the background you can see the results of the creature's activity.

It is a symbolic calendar that the majority of Ukrainians now live by. Starting from 24 February, every next day is still 24 February. This poster was created on the 24th of March, but nothing has changed, even today Ukrainians feel they live the same day.