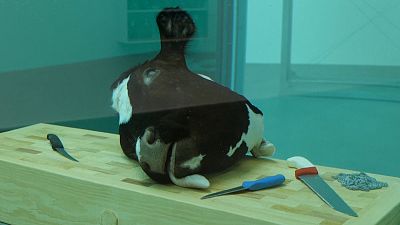 Damien Hirst, the controversial British artist was notorious for shocking the art world with his chopped up animals in formaldehyde and rotting meat artworks.

Now some of his early works are on display in London.

Art gallery Gagosian is opening the largest exhibition dedicated to this peculiar series of works by Hirst — over 20 — spanning from 1991 to 2021.

A shocking, but visually striking display

Hirst rose to fame in the early 1990s with his early works of dead animals put in formaldehyde.

This colourless gas allows him to present animals in a cool and unique style.

"Damien's work always grapples with really essential themes, sort of art and science, life and death, fear and beauty, religion. And he's thinking about these sort of bigger picture ideas, and they're really all really beautifully incorporated in this body of work," says Millicent Wilner, Director of Gagosian Gallery.

A standout piece of the exhibition is 'Death Denied' - which features a shark in formaldehyde.

Another highlight of the show is 'The Little Piggy Went to Market, This Little Piggy Stayed at Home' - which contained a pig cut in two parts.

Each half is preserved in an individual box, with one of them slowly moving forwards and backwards to reveal its organs.

"He's very interested in minimalism. So the way that these works are sort of framed and enclosed and encased in these vitrines and presented in this fashion is paramount to the work," says Wilner.

Hirst and his influences

For his piece 'The Pursuit of Oblivion', Hirst was inspired by the work of painter Francis Bacon.

It's one of the most elaborate works of the show, containing a dove, sides of beef and sausage. But unlike most of the other artworks, this one contains numerous objects as well: an umbrella, a motorcycle helmet, a clock, etc.

"And there are many ways that I think Bacon's work, both in terms of themes and presentation, are reflected in Damien's, the sort of framing and Bacon's work, they're always presented behind Glass and Damien likes that sort of separation between the objects and the viewer," says Wilner.

'Natural History' runs from 10 March at the Gagosian gallery in London.

Check out the video for a look inside the new exhibition