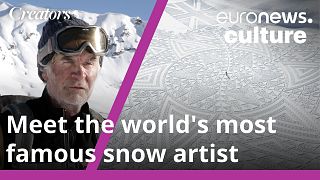 Taking a ski lift to a remote mountain, walking for up to 10 hours in thick snow to draw huge geometric patterns only to see them disappear with the next snowfall. A normal day for 60-year-old Simon Beck.

With a total of 365 drawings in the snow and around 200 in the sand, at locations all over the world, Beck’s art is one of a kind.

The University of Oxford-educated engineer and former cartographer left his native England 15 years ago to settle in Les Arcs, a ski resort in the Tarentaise Valley in the French Alps.

The idea of making snow drawings came to him after a day of skiing. With energy left to spare, he spotted a frozen lake covered in fresh snow. He grabbed his surveying compass, measured five points around a central point and joined the dots, creating a five-pointed star. His first-ever snow art.

“I'm very lucky that I found something I liked doing and actually get a certain amount of money for it … enough to live anyway,” says Beck.

Beck’s creative process always follows the same steps. The first stage, where he draws out the main lines, is the most meticulous, making a mistake at this stage would impact the final quality of the design. The second and third steps consist of drawing the secondary lines and shading the fractals around the edge.

What I do, really, is graffiti. And there are people who think it is graffiti, they don't actually like it. I would not do this were it not for the fact that nature is going to completely remove it.

“Once the lines are all in place, I then put on my personal stereo. I can then listen to music at the same time as actually doing the drawing,” says Beck, who prefers to work to classical music.

As simple as it sounds, Beck’s art is physically taxing. At an average of 93 steps per minute, one of his larger works can rack up more than 55,000 steps.

“As I get older, I'm finding it takes me longer to make a drawing, but I can still get as much work done before I get too tired to carry on.”

For Beck, the ephemeral nature of his art is an integral part of his approach.

“What I do, really, is graffiti. And there are people who think it is graffiti, they don't actually like it. I would not do this were it not for the fact that nature is going to completely remove it.”

In this episode of Creators, a series where we get inside some of the world's top creative minds, Simon Beck talks about his rigorous technique, the temporary nature of his work and the change of career path that made him the world’s most famous snow artist. For more on this story, watch the video in the media player above.